Every year a group of very special people gather in a different location of the world to share their love for languages. The Polyglot Conference is the place to be for these polyglots, hyperpolyglots, linguists, grammar nerds, forever learners and language lovers hailing from all around the world. I had the chance to fly to Thessaloniki, Greece (this year’s location) last week to attend the event and I can now share seven extremely valuable things I’ve learned. 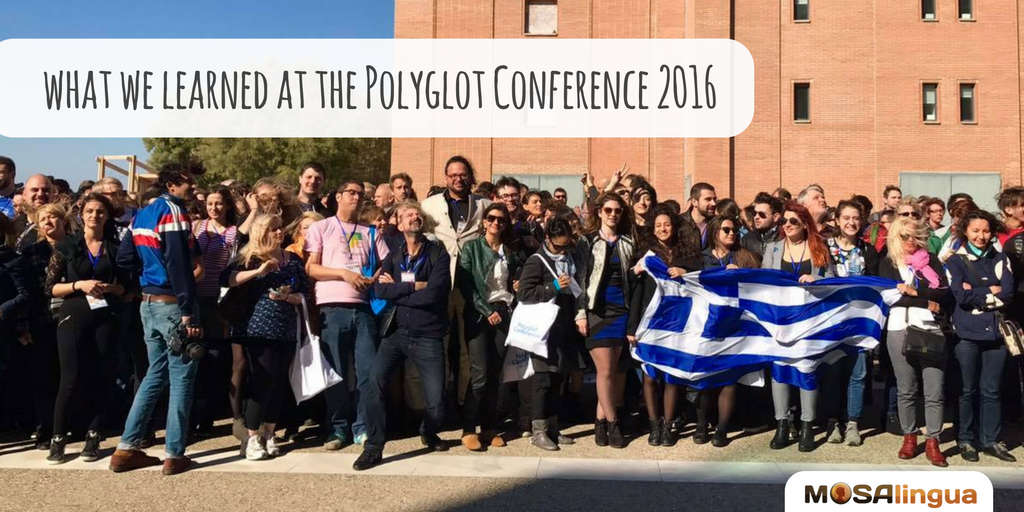 1 – You can reach proficiency in a language at any age

During his interesting talk, prof. Tim Keeley (University of Fukuoka) covered the link between age and ability to become proficient in a foreign language. A common misconception about learning a foreign language is that age is a critical factor, highlighting that the older we get, the harder it is to learn a language. Apart from the academic and research evidence brought by the speaker against this claim, I can add that I met so many impressive +50 and +60 year-old polyglots  at the conference that it’s hard to believe that age can influence our language skills.

These are the talk key messages:

More material about this topic:

During the conference I met many amazing polyglots and I noticed that a lot of them made the effort to learn unusual languages such as Farsi, Tagalog, Finnish and Wolof, so I couldn’t help but ask their motivations to learn them!

One of the answers I got often was: “because I simply like the language!” Actually apart from my love for Brazil and Japan, this is the n.1 reason for my interest in Brazilian Portuguese (which I already speak) and Japanese (my next language after German).

So even if it’s important to have a strong motivation to learn a language, you do not need a precise and utilitarian reason to do so.

More material about this topic:

3 – Translations can be a useful tool to learn a language

Our friend Luca Lampariello brilliantly showed his personal approach for learning a new language using bilingual material. In a nutshell, Luca suggests to bi-directionally translate sentences and dialogues to acquire the vocabulary and grammar of your target language. What I liked is that his method can be also adapted using our apps in which you use flashcards to constantly switch from the original language to the target language and where grammar concepts are acquired observing the two languages in their context.

Some precious tips Luca gave during the talk:

The keynote given by Prof. Ghil’ad Zuckerman (University of Adelaide) explained how reviving heritage languages (which he nicely defined as “sleeping beauties”) can help minorities get back their identity and empower themselves to live a better life.
The talk highlights:
More material about this topic:

Ellen Jovin shared her compulsive passion for language products giving an extremely original and entertaining talk about the personal language world she created by learning dozens of languages in the course of the last 20 years. It’s very hard to sum up her great presentation, but she confirmed my thinking about the fact that every learner is different and therefore can create his/her own personal kit of language tools. This kit is often made of different tools (apps, online tools, standard courses). Our readers already know that in addition to our apps (focusing on quick vocabulary acquisition), we suggest using other complementary tools.
The talk key moments: 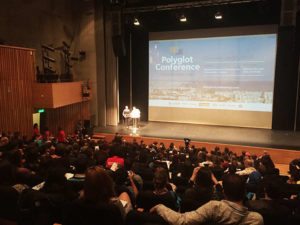 6 – You can use music to improve your accent

After asking himself, “why is my accent so bad?” (the title of his talk), Anthony Lauder shared his findings about the topic in an extremely funny and entertaining talk. Anthony joked about the fact that anytime he speaks a foreign languages, he gets asked what part of the UK he’s from. If you are a regular reader of our blog, you know that my personal tip is not making a fuss about your accent. The important thing is to get good at pronunciation in order to be understood without a problem.
His talks key moments:
More material about this topic:

7 – No need to live abroad to master a language

I repeat this all the time so it’s no news to me. I learned English, Spanish and Portuguese without living abroad. But it’s always great to meet people who confirm your thoughts!

I met a guy who had a perfect Argentinian accent who has never visited Argentina. He told me that he got his accent by watching Argentinian movies. Then I spoke in Portuguese and Italian with some language lovers who had impressive mastery of these languages. They spoke with an accent very close to a native speaker despite not having lived in Italy or Brazil.

As a bonus for our beloved readers, during the conference I asked four extremely experienced language learners what their first personal steps were when they started to learn a new language. I’d like to thank them for their kindness and help!
In addition to a summary of the event, in this video you will discover incredibly useful tips from some polyglots. They include Richard Simcott, Alex Rawlings, Jimmy Mello and Conor Clyne: