Would you like to learn English but don’t know whether to choose a British or an American dialect? Are you curious about some of the differences in American vs. British words? Two of our English teachers, Lisa Joy and Abbe, have prepared this post (and a video!) to highlight some of the biggest vocabulary differences. Of course, the list is far from exhaustive, but you should be able to avoid embarrassment if you follow their advice! 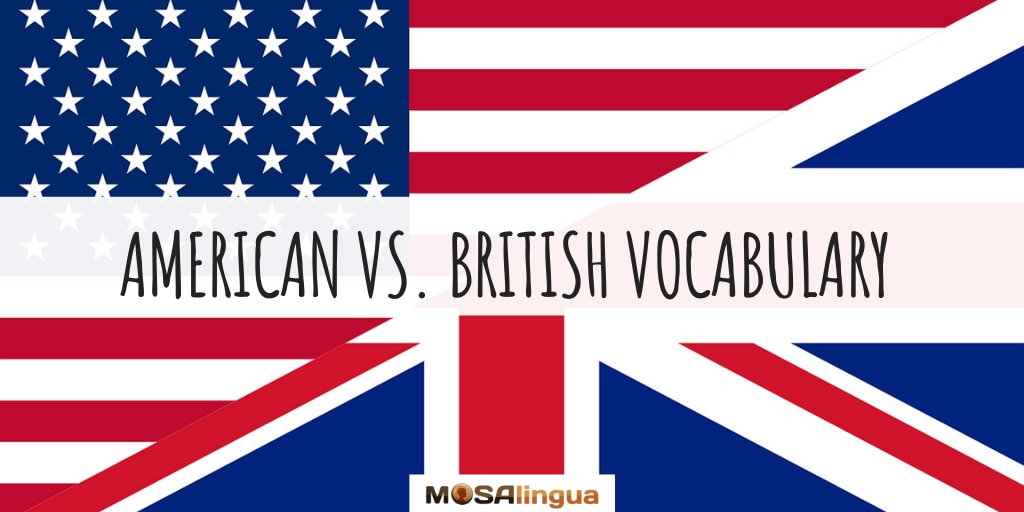 If you’d prefer to listen to this article, head over to the MosaLingua Language Lab podcast:

Listen to “#10 – American English vs. British English Words” on Spreaker.

American vs. British Words, Verbs, and Spelling: Differences to Note

When you started to learn English, did you realize that there were big differences between the forms of English spoken around the world? Today we’re only going to look at a couple of them: British English and American English. It can sometimes get confusing, even though it’s technically the same language. Sometimes it really can feel like the United States and the United Kingdom are worlds apart! Here are a few of the differences between American and British English.

First vocabulary word: alright. A word as simple as that might make you think it has the same meaning anywhere. Not true!

Alright is often used as a greeting in the United Kingdom: “Hi! Alright?” just means “Hi, how’s it going?” As in many languages, this greeting is more meant to be polite than to ask after someone’s physical or mental health.

But in the United States, alright is actually used to ask after a person’s well-being, usually after they’ve been through some kind of physical or emotional pain. “Are you alright?” is a phrase that expresses concern.

Maybe you already know the difference between pants and trousers.

In the United States, Abbe (American), might tell Lisa Joy (British): “Hey, I love your pants! Where did you get them from?” But in the United Kingdom, Lisa Joy would be totally confused and would wonder how Abbe could see her pants when she’s clearly wearing trousers on top of them.

You guessed it: in British English, pants is the word for what we call underwear or panties in American English. Americans also use the word trousers or slacks, but only to refer to dress pants.

Now that the American is thoroughly embarrassed, it’s the Brit’s turn. Indeed, there’s a common mistake that can be pretty awkward…asking an American for “a rubber” in class. An eraser, that’s pretty normal, right? You made a mistake on your paper and you want to erase it… Well, a classroom is neither the time nor place to use what the American would give you—a condom!

And if your teachers saw you exchanging condoms in class, they’d be pissed!

This is another difference between British and American vocabulary! In the US, pissed is a slightly vulgar expression to say that someone is angry. But in the UK, pissed means they’ve had too much to drink! In which case they should be at their flat, not at school!

There are also two words for apartment depending upon the English you speak. The British say flat while Americans use a word much closer to romance languages: apartment.

And speaking of apartments—be careful! If an American goes to visit a friend in the UK who tells them that their flat is on the first floor, the American will most likely knock on the wrong door! In the US, the first floor is the floor you enter on. In the UK, that’s called the ground floor. Once you finally make it to the right apartment (or flat) your friend might offer you a snack.

American vs. British words for food

There are also lots of differences between American vs. British words when it comes to food. If you’re in the UK and someone asks if you’d like a pudding, they’re asking if you’d like a sweet treat, or a dessert. In the US, pudding is a specific kind of smooth creamy dessert similar to flan. In the UK, it would be called custard.

There’s lots of other food vocabulary with similar differences. Another common one is cookies and biscuits. Or chips and French fries. These aren’t just regional peculiarities, they also have separate meanings in one or both languages. In the US, if you order a biscuit, not only will you not get a cookie, but you’ll get something else entirely: a fluffy southern pastry. And if you order chips, you’ll get a different kind of fried potato than you’re expecting: crunchy potato chips, or crisps.

Aside from “pure” vocabulary, expressions with prepositions are another tricky topic for language learners! And it’s even more complicated in English, because British and American English don’t always use the same prepositions for the same expressions.

For example, an American would say: “What I did on the weekends in college is different from what my British friends did.”

While a Brit would say: “What I did at the weekend at university is different to what my American friends did.”

Knowing subtle differences like these can take your fluency to the next level, but don’t worry about them unless you’re an advanced learner. That said, it won’t hurt to take note of them if you observe them during your language immersion practice. Maybe you’ve already learned some!

There are also a few verbs that can pose a problem. For example, to form the past tense of the verb to learn, Abbe would say learned, but Lisa Joy would say learnt. This is yet another kind of difference between the two forms of the language. British English has more irregular verbs than American English.

In the US, words like dream, burn, and spill take the regular -ed in the past tense, but they end in -t in the UK.

For more on this topic:

On the subject of spelling, don’t forget these other changes:

MosaTip: Your word processor, as well writing plugins like Grammarly, can help you remember these and other spelling differences between US and UK.

How do I know if a word is US or UK English?

How can English students find out if a word is mostly used in American or British English, or both? Some online dictionaries will mark words if they are really common in one dialect but not at all common in the other. Also, we’ll always let you know on a MosaLingua flashcard whether the expression you’re learning has a British variant, even if the recordings are always done by an American speaker.

And another good place to pick up typically American or typically British expressions and vocabulary is movies and TV, especially sitcoms. Some TV shows, like The Office, even have two different versions, and it can be interesting to compare the vocabulary and even the different styles of humor. Not sure what to watch? Here are our suggestions:

Which vocabulary should I learn?

So, should people who are learning English focus on British vocabulary or American vocabulary? Actually, it doesn’t really matter which one you choose. The most important thing is to be consistent.

It would be a dead giveaway that you’re not a native English speaker if you said something like, “Want to come back to my flat at the weekend for French fries?”

Also, make sure the accent you adopt matches the vocabulary you use. Check out our guide to English pronunciation for more about the different regional accents.

The vast majority of English vocabulary is used, or at least understood, in both dialects. Context can be very helpful when you hear or read a new vocabulary word from a different dialect than the one you’re used to.

We sometimes have a different spelling for the same word, but you can often guess the meaning. For example, car park is a British term for what Americans call a parking lot or parking garage.

Or in the sentence: “Ick! That baby needs his nappy changed.” In context, it’s pretty clear that we’re talking about a baby’s diaper (US).

Listen to Us Talk About These American vs. British Words & Get Other English Tips!

You can listen to Lisa Joy and Abbe, our English teachers, talk about all the points discussed above in our video on YouTube or below. The video is in English, but you can turn on subtitles by clicking on the “Settings” gear at the bottom right. You can also slow down the playback speed (again, click on the gear).

Subscribe to our channel for more tips and tricks!

If the subject of American vs. British words interests you and you’d like to learn more, check out these other articles: