Those fluttering, throaty r’s, those elegantly intoned nasal vowels, the steady back and forth of that hypnotic rhythm. The sound of French is distinctive even to those who have never studied it in their lives. Just a sentence of it is enough to get you in the mood for red wine and riverside walks. But clichés aside, what is it about this language and its physicality that carries with it this overflowing charisma we all know so well? And what is the most beautiful French word of them all? 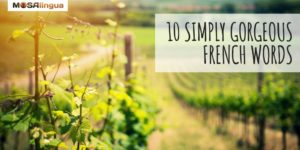 The 10 Most Beautiful French Words and Their Meanings

French would appear to prioritize phonetic harmony in a way that few other languages do. Just ask any member of L’Académie Française, the famous French institution devoted to preserving the language’s purity and aesthetic fervor. Many who have attempted to dissect the beauty of French have put it down to specific technical elements, such as its even rhythm (unlike in English, the stress falls neatly on the final syllable of each word), its distinctive fricatives (think ‘zh’ and ‘r’), and its soft, gentle vowel sounds.

I lack the linguistics credentials to delve too deeply into the aesthetic mechanics of the language. I can, however, offer up a few terms that I feel encompass my personal encounters with the profound loveliness of French. So, here are, in my humble opinion, ten of the most swooningly gorgeous words in the French language.

To begin with a classic, ‘lumière’ feels like the linguistic equivalent of a rhumba. Its movement oozes and slithers exquisitely, and it only seems to get more beautiful the more times you repeat it. It lives up to its meaning without a doubt; if words could shine, this one certainly would.

Playful and sweet, the very sound of this beautiful French word paints a picture of children running through poppy fields in the summer, carefree and in love with life. The hard c’s click as satisfyingly as Dorothy’s poppy-red shoes. It’s innocent, refreshing, and genuinely difficult to say without smiling – try it.

This word couples a heavy, ancient-greek flamboyance with its delicate French finale, which feels like the perfect fit for its meaning. After all, who hasn’t felt that glorious combination of grandiosity and quiet earnestness while sitting in a library, particularly those situated in Paris’s fabulous Latin quarter?

This one is probably the most surprisingly beautiful French word! I’ve included it if only the sheer, whimsical irony of the word for ‘bin’ being so charming. In my love-struck, French-obsessed mind, the beauty of ‘poubelle’ (which literally includes the word ‘belle’, for heavens’ sake) is indicative of this language’s abundant generosity. No concept, however unsightly, will be left without linguistic window dressing of some kind. French, you’re too good to us.

Most commonly paired with ‘gel’ to mean ‘hand sanitizer’ (these days, at least), ‘hydroalcoolique’ might also seem somewhat left of field. However, in the early days of the pandemic, when the status of hand sanitizer felt like it was on a par with that of oxygen, I couldn’t help but notice how melodic and generally pleasing this word was. It was undeniably clinical and being used in the depressing context of ‘le confinement’ (lockdown) and ‘un prélèvement’ (swab), and yet somehow it managed to be beautiful. As with ‘poubelle’, this is the kind of phenomenon that’s only possible in French.

Another one that evokes summer and meadows, ‘papillon’ is light on its feet and just so darn fun to say. Derived from the Latin word ‘papilio,’ its plosive sweetness really does convey the flapping of a butterfly’s wings. Plus, love them or hate them, the French language does nasal vowels fabulously.

Unexpected perhaps, but sometimes, in a room full of elaborate, almost exhaustingly pretty outfits, simplicity trumps all. The same is true of vocabulary. Ever since I learned the word ‘lâche,’ I’ve been inexplicably enchanted by it. Perhaps it’s its brevity. Or maybe it’s the appropriately soft ending that sounds like falling snow. Plus, who can resist that elegant circumflex? For whatever reason, it remains among my most loved beautiful French words.

This is a word I encountered for the first time in something of a panic, having locked myself out of my Paris apartment. Though, at the time, aesthetic appreciation wasn’t at the forefront of my mind, while recounting the story later, it struck me how charming the French term for locksmith is.

It’s a bit of a mouthful but I assure you that all those hours of struggling to perfect that French r will seem thoroughly worth it the day you succeed in correctly pronouncing ‘serrurier’ (along with its even scarier older brother, ‘serrurerie’).

One for the more advanced learners out there. You may not have encountered this word before but now that you have, you’ll be looking for any excuse to use it in conversation. Maybe it’s the melodic rhythm, maybe it’s the way its ending seems to curl coyly in on itself but there’s an indefinable elegance about ‘envergure’ that’s guaranteed to make any sentence sound a whole lot more classy.

Quite apart from the gorgeousness of this word, complete with its oh so expressive diphthong, there’s always something delicious about a word that has no direct translation in English. Stumbling across such words never gets old and it’s moments like these that language learning is at its most mind-expanding.

If this list doesn’t leave you sighing like a love-sick poet and scrambling to download a French language app (MosaLingua, anyone?), I frankly don’t know what will. Of course, aesthetics shouldn’t be your sole focus when it comes to learning a language. But a bit of unbridled loveliness popping up in your vocabulary lists from time to time can be an excellent motivator during those tougher moments inevitably encountered by all learners. Mastering a language you find beautiful is a truly thrilling experience. So, savor those moments of elegance and sophistication because they’ll make the journey to fluency that bit more magical.

Ella is a content writer at Tutor House with a passion for language in all its forms. Having fallen passionately in love with French as a teenager, she has recently moved onto Russian and so these days, when she’s not listening to Serge Gainsbourg’s albums on repeat, she can often be found grappling with the instrumental case and verbs of movement.

Filed Under: FrenchTagged With: vocabulary