Not long ago, we talked about the different hand gestures used by Italians and Brazilians when they communicate. It’s a well-known fact: many people from Italy, Brazil, France, even the United States and England use their hands during conversation. When we speak, our mouth is not the only body part we can use to help get our message across… Today we’re going to explore this idea, the idea of another “language” we use to communicate: body language. Why is it so important, and how can you learn it? 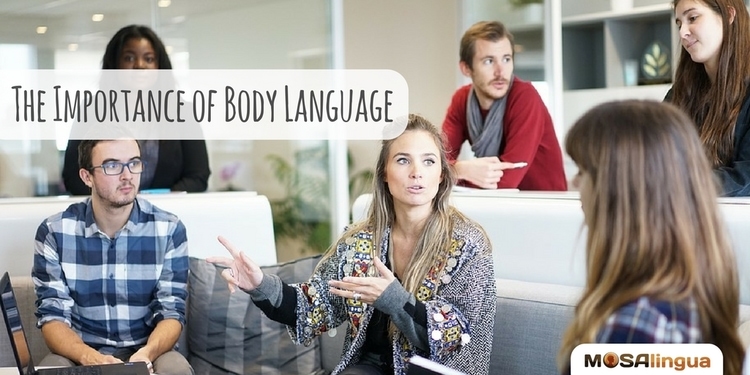 Communicating with Your Body…

It’s true! Everyone knows that words aren’t humans’ only means of communication. Gestures, facial expressions, body movements and posture, and intonation can all convey a message or add something to it. They are almost more important than verbal language! Albert Mehrabian even did a study on this subject; check it out!

In the late 60s, Mehrabian conducted several experiments to find out just how important gestures and intonation are for conveying a message. So what were his results? Only 7 % of communication is verbal, 38 % is considered paraverbal (meaning tone and intonation) and 55% is non-verbal! As you can see, gestures, hand signals, and different body movements are extremely important to know how to use!

Okay, just between us, these numbers might be somewhat debatable… Mehrabian himself acknowledged that they were the result of a controlled experiment, and that they don’t completely reflect a realistic situation. But the results did allow Mehrabian to make this point: words alone are not enough to fully understand the complete intention of someone’s message. The takeaway: intonation and the way the message is sent also count for something.

To give you a simple example, think about the word “thanks.” A positive connotation is generally associated with this word. However, think about how you might understand it differently if the person saying it does so with a firm or curt tone of voice (or maybe while rolling their eyes). You may interpret it in a completely different way, and “thanks” in this context will likely seem much less positive. Intonation is just as important as the words themselves when it comes to conveying “feeling.”

Intonation changes, just like facial expressions, don’t vary too much from culture to culture. Disgust is easy to read on someone’s face, whether they are French or Spanish. Similarly, intonations associated with happiness and sadness are generally easy to pick up on no matter where you are from. In addition to intonation, body language also includes physical gestures.

These telling gestures help convey subtleties of a message. They can even replace words in some situations. For example, if you are interested in what the other person is telling you, you probably won’t cut them off and say, “Hey that’s interesting! Go ahead, keep going.” Instead, you may lean closer to them to let them know you are interested and curious about what they have to say, or you might nod your head in agreement. This is non-verbal communication.

Most of the gestures we use to help convey messages, we make with our hands. Lize et Mara translate some common Italian and Brazilian hand gestures for you in this fun video. Check it out below:

In the United States, we might say hello by waving. Sometimes we give a “thumbs-up” to let someone know that something is good. Or, we might show them our middle finger if we are very upset! We can even tell someone that we are getting impatient, just by using our hands. The use of hand gestures is universal: all cultures use them for non-verbal communication. But they don’t always mean the same things!

Learning a foreign language is hard enough, and now you have to think about body language, too?! We’ve got your back. Take a look at the tips we have for you for learning this subtle “language”!

How to Learn Body Language?

You probably are familiar with most of the body language used by other Americans or Brits, although there might be some small regional differences, but you may not know much about the gestures or other non-verbal communication methods of other cultures. Did you know that waving your hand, a way to say “hello” in some cultures, can really offend people in Croatia? They believe it is too close to Hitler’s Nazi salute. What an unfortunate person to be associated with, just for saying hi! We have a few tips for you if you’d like to complement your language learning with information about non-verbal cues.

How to learn another culture’s non-verbal cues

If you have a close relationship with your language partner and feel comfortable, you can even ask them which gestures you should not use. It could save you some trouble or embarrassment if you ever travel to their country!

Why is Body Language Worth Learning?

We’ve already seen a few instances in which body language can totally change how we interpret messages. Using the right or the wrong gestures can make or break your relationship with the people you meet during your travels. If you are ignorant to their customs, you might offend someone or be misunderstood. Perhaps even more unfortunate, you might misinterpret the messages of others. In learning the body language of another culture, you will gain respect and credibility, and have an easier time understanding the people you meet.

Video on the importance of body language in communication

For more info about cultural body language, check out the video below. You can just scroll down, or watch it on our YouTube channel. It’s in English but there are subtitles in other languages, which you can turn on with the gear button in the bottom right corner of the video.

In conclusion, using the right gestures is almost as important as using the right words! So, the next time you watch a movie, binge on a series, or webcam chat with your conversation partner, pay close attention to the movements of the people you are watching. If you have other tips to share, leave them in the comments below!

Filed Under: LanguagesTagged With: speaking