You’re full of motivation and eager to get started learning a new language… Now what? You browse through all the language learning resources after a quick Google search and you’re overwhelmed by the bazillions of results you get. All very different from one another, of course. Unfortunately, that’s what countless language learners face when starting to learn a language. But luckily for you, there are solutions! Today I want to tell you a little bit about someone I know, how he struggled with this problem and eventually was able to find and choose the best language learning resources out there. His name is Cédric. 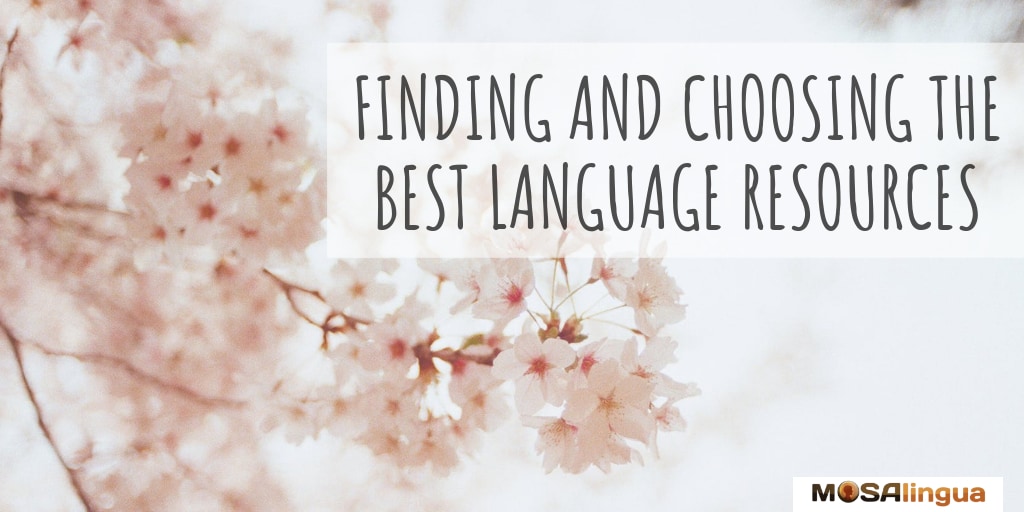 Steps to Finding the Right Language Resources for You

Before you even start looking for language learning resources and tools, you really need to pin down a goal.

In Cédric’s case (the 100% fictional character in today’s story 😉 ), his love for Japanese blossomed from the TV shows he was watching. And eventually he realized he wanted to learn the language. He started reading a few textbooks and websites, and doing a couple of exercises. He felt like he was back in high school again. But soon he began feeling like he wasn’t getting anywhere, because every time he found the answer to one of his questions, ten new questions came up! He was going around and around in circles. What he seemed to need was a clear direction for his studies.

To get your compass pointing in the right direction, you just need an answer to one simple question: “Why do you want to learn a new language?” Cédric wanted to be able to understand Japanese TV shows without having to rely on subtitles. If he had begun with a goal, he would have known from the start that spending hours trying to memorize Japanese characters wouldn’t do him much good. Coming up with a clear and specific goal is really important, because it will guide the way you pick language resources.

So, what’s your goal?

Setting a time frame can be motivating too, but keep it flexible as you can never be completely sure how much time you will need. Now, write your goal on a piece of paper and tape it somewhere where you’ll see it every day. Trust us, it helps!

Back to our example: to watch shows, Cédric need to know some vocabulary, learn basic grammar but not too much, and most of all, find plenty of audio and audiovisual resources to practice his listening skills.

Fast forward to a few weeks later. Cédric has been practicing his Japanese listening skills on a regular basis, but he’s losing a bit of steam. Every time he starts his practice session, he feels like he’s back in high school. It’s just so booo-ring. He feels so far away from the goal he set for himself. What about those TV shows he enjoys watching? What about Japanese culture? Why he is listening to bland dialogues about people going to the supermarket?

You see, learning a language is not like learning anything other topic. Unlike subjects like math, you have live language. It’s more than just the words and grammar rules you learn. It has to make sense to you, just like anything else that you enjoy. That’s why Cédric should have chosen learning resources that were more aligned with his interests if he wanted to stay interested and excited to learn.

Your interests and hobbies are not the only things to take into account. You also want to think about your favorite type of activity.

So instead of doing exactly what he did in his high school language classes, he decided to listen to short videos in Japanese and expand his knowledge of the Japanese language that way. He was having a great time, on his couch, and discovering more about the Empire of the Rising Sun. (That’s Japan, by the way!)

Now that Cédric knows what kind of resources match his goal and interests, he is still facing another problem: where to find them? As I said earlier, there are tons out there, and picking one can be a real nightmare. But he doesn’t have to go it alone. He can walk down the same path that other learners have already bushwhacked their way through. In other words, he can pick language resources that other learners have already tried and recommend.

Lots of people document their language learning journey online, and their experiences can be priceless resources in and of themselves. By following them, you can get the answers to the questions you may be asking yourself and find the best resources to suit your needs.

By the way, our blog is entirely based on the experiences of our team of polyglots, including yours truly. It’s an excellent place to start your research online. You might stumble upon some gems that will help you find the best language resources for your needs, goals, learning style and lifestyle. Not sure where to start?

Summing It All Up: Here’s How to Pick the Right Language Resources

Here’s what you need to do to choose the right language resources and tools:

Cédric (the real one, not our fictional learner) has some special video tips for you. Scroll down, or head over to our channel to watch it on YouTube. He recorded it in English, so why not practice your listening skills? If you’d prefer to watch with subtitles in another language, click the gear button to choose one.

Cédric is a passionate language hacker and polyglot. Originally from France, Cédric likes to travel a lot and has lived in several different countries. He has taught himself 6 languages and he has no intention to stop. When he’s not working on improving our apps and courses, you might find him somewhere chatting with some international friends (rigorously in a foreign language). He speaks: French, English, Spanish, Portuguese, Italian, and German