Ho, ho, ho! Christmas is nearly here! Carols are playing on a loop in every store, the streets are illuminated with strings of colorful lights, and the whole house smells like pine trees and sugar cookies. Yep, we can feel the holiday spirit in the air—can’t you? If you’re spending the holidays abroad this year, or want to wish your foreign friends a very merry Christmas and a happy New Year, you’ll need to know some essential Christmas vocabulary! With this list of Christmas words and phrases that we translated into 8 languages, you’ll not only learn some vocab for Christmas table talk. You may discover some new holiday traditions from around the world, too! So, this holiday season, eat, drink, be merry, and practice your language skills! 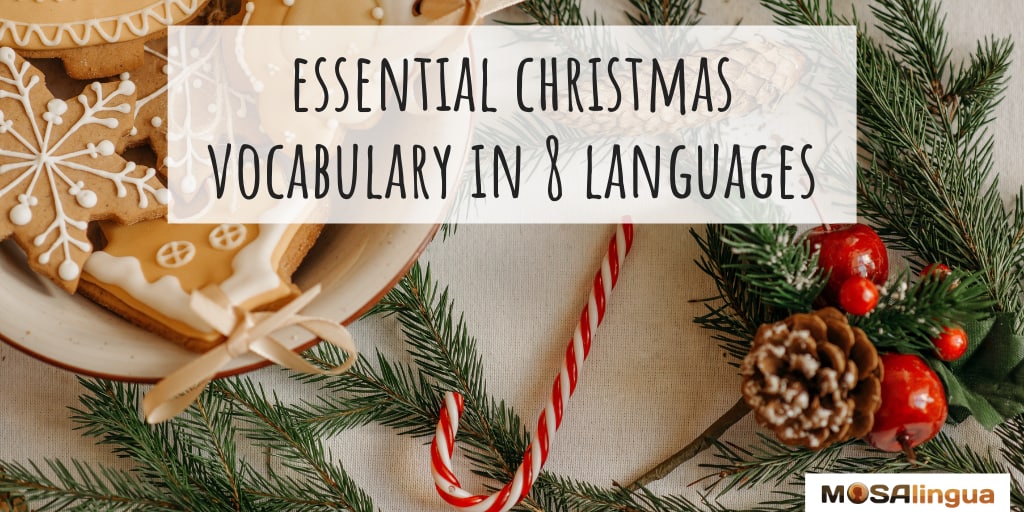 Why and How to Learn Christmas Vocabulary in Spanish, German, and 5 Other Foreign Languages

The winter holidays are often a time when people get together to share meals, make memories, give to those less fortunate, and spend time with loved ones. If your Christmas break this year includes travel or other interactions with people who don’t speak your native language, it’s a good idea to learn some Christmas vocabulary in various languages. Not everyone celebrates Christmas, of course, but much of the world does. Especially at this time of year, people genuinely appreciate it when others make an effort to wish them well and take an interest in their local and family customs.

So make it your early New Years’ resolution to some of the Christmas words in the list we’ve prepared for you. Then, use it to learn about how your friends in other countries celebrate, and to share information about your own holiday traditions!

How to practice Christmas vocabulary

As you’ll see, Christmas vocabulary is quite varied, and since you only use it once a year you’ll probably need some help learning it. We recommend memorizing it with an app like MosaLingua and then testing it out with a language partner! If you practice it on your own and with your conversation partner in the days leading up to Christmas, you’ll feel much more comfortable using it spontaneously during the holiday festivities.

December 25th is nearly here, but you still have time to quiz yourself on the vocabulary you’ve learned. Incorporate your favorite Christmas activities into your vocab practice. Pop on a Christmas playlist, or browse the many, many Christmas movies available in multiple languages on Netflix! Turn on the subtitles in your target language if needed, make yourself a mug of peppermint hot chocolate, and see how many new Christmas-themed words and phrases you can recognize!

Now that you know how to learn and practice it, here’s some of the most common Christmas vocabulary in English and 7 other languages. This list will also give you a sneak preview of some holiday traditions you may encounter if you ever travel the world at Christmastime. Study up, because there are only a few more days until Santa comes!

🤶 How to say “Merry Christmas!”

If you only remember one thing from this whole list of Christmas vocabulary, make it this: how to say “Merry Christmas” in Italian, German, Russian, and several other foreign languages! Learn proper pronunciation to ensure that your message gets across successfully! To do so, click the play button next to each phrase to hear it pronounced by a native speaker.

And check out this article to learn how to say “Merry Christmas” in some other lesser-known languages, including Esperanto.

🎄 How to say “Christmas tree”

This jolly old man lives in the North Pole and drives a reindeer-powered sleigh all around the world on Christmas Eve to deliver gifts to children on the nice list (and coal to the naughty ones!). In English, Santa is also sometimes called Saint Nick, Father Christmas, or Kris Kringle. Now, learn how to say Santa Claus in different languages!

🎶 How to say “Christmas carols”

Songs are an excellent way to learn the language of your choice via a fun, creative hobby! And you can learn tons more Christmas vocabulary from traditional Christmas carols as well as popular Christmas songs. Haven’t ever tried learning with music before? Check out our guide to get started.

MosaTip: Scrambling for ideas for those people on your list who seem to have everything? For a super unique Christmas present, give the gift of language to your friends and family. (Or hey, why not stuff your own stocking?) MosaLingua gift cards are easy, meaningful, no-waste Christmas or Hanukkah gifts that your loved ones will adore!

The Yule log, a Swiss roll-style cake sometimes decorated to look like a log, is a typical Christmas dessert, commonly served in French-speaking countries and former French colonies. You’ve probably heard of it, even if you’ve never had it at your own Christmas dinner. In Brazil, instead of the Yule log, the typical Christmas cake is panettone, which actually originated in Italy. People in the UK tend to eat dense, boozy fruitcake at Christmastime.

👼🏻 How to say “Christmas decorations”

In the United States, typical Christmas decorations include angels, nativity scenes, snowglobes, reindeer, candy canes, wreathes, and stockings. What holiday decorations are most popular where you live? Tell us how you spread Christmas cheer in your home in the comments section below!

🛍 How to say “Christmas market”

🏠 How to say “gingerbread house”

🌃 How to say “Christmas Eve”

🗓 How to say “Advent calendar”

Advent calendars, especially popular among European children, start on December 1st and feature one door to open per day leading up to Christmas. Depending on the theme of the calendar you choose, behind each door lies a yummy chocolate, a mini beauty product, a toy, or even a piece of luxury jewerly! As I said before, you should practice the words from this list in the days and weeks leading up to Christmas. So, why not create your very own Christmas vocabulary Advent calendar and make learning language a fun daily activity? You can get the whole family involved!

Mulled wine is a hot red wine drink made with a blend of Christmasy spices like cinnamon, star anise, and orange. It is traditionally sold at European Christmas markets. If you’d like to try this delicacy, perfect for warming you up after a day of gift shopping, here’s how to say mulled wine in Spanish, French, German, and several other languages:

MosaTip: We included the word for mulled wine in Portuguese since you’ll find it at some markets in Portugal. However, it’s not a traditional Christmas drink in Brazil, since December is summer there!

There you have it! Now you know all of the most common Christmas vocabulary in 7 foreign languages. Even if you don’t plan on becoming fluent in any of these languages, you’ll at least be able to understand and communicate with native speakers when you spend the Christmas holidays abroad. What other holiday-related words would you like to learn in your target language? Let us know in the comments and we’ll tell you! And don’t forget to add these Christmas words to your MosaLingua app to start memorizing them before the big day.

Wishing you and yours a very Merry Christmas, wherever in the world you happen to be!

Filed Under: LanguagesTagged With: vocabulary