There are a handful of very common Spanish mistakes that every learner is bound to make from time to time, even with a good grasp of Spanish grammar and vocabulary. The trick is knowing how to recover from them—particularly how to recognize the mistake and not make it again. So, we’ve put together a list of 7 of the most common Spanish grammar mistakes. If you’re a Spanish learner, get familiar with them in order to avoid some pretty awkward situations! 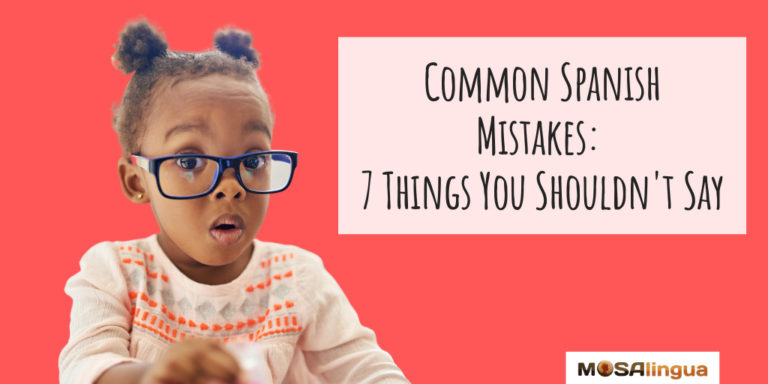 Unfortunately, mistakes are inevitable during the learning process. Most aren’t too serious, and people can typically understand what you meant to say. But some errors can send your conversation to an awkward place in a hurry…

Today, we’ll have a look at 7 common (and funny!) Spanish mistakes that teachers hear all the time.

I’ve heard this one so many times in my Spanish classes! “Yo soy aburrido” (or “aburrida” in the feminine) does not mean “I’m bored.” In fact, it’s the opposite—it means “I’m boring!” That’s not a quality a lot of people like to advertise!

Every language has “false friends”!

Once, I heard one of my female students say to her friend: “Estoy muy embarazada y es culpa de tu hermano.”

I couldn’t believe my ears… I looked at her closely at her stomach, but it didn’t seem any rounder than usual. Then, I looked at her friend, who seemed to find what she was saying very funny.

I asked her if she was serious, and then I realized what had happened. She hadn’t meant to say “I’m pregnant,” but rather that she was embarrassed because her friend’s brother had played a trick on her!

In Spanish, we would say “estoy avergonzada” or “qué vergüenza.”

Careful! Some physical sensations, like being warm, cold, or hungry are worded differently in Spanish than in English!

Saying “yo estoy caliente” means that you are sexually aroused. Generally, this isn’t something you’d want to announce to a room full of people, especially if you’ve just burst into your classroom after running in from the bus stop, right? Instead, use the verb tener (to have), followed by a noun. Here are a few examples:

So, if you want to avoid preservatives in food and drinks, please don’t say “sin preservativos” (“without condoms”)! Instead, you should say “sin conservantes.”

With this expression, it’s pretty easy to tell that the speaker is trying to say, “I would like to introduce you to my friend.” But this is a case of one of the more nuanced grammatical errors in Spanish.

In fact, introducir does not work in this context. Instead, it means “introduce” in the sense of insertion; to put one thing inside of another. So if you say, “Quiero introducirte a mi amigo,” you’re really saying “I’d like to put my friend inside of you…” Awkward no matter what way you slice it!

Instead, what you should say is:

In Spanish, we don’t say “¿Puedo tener…?” to order in a restaurant or to ask someone to give us something. In fact, “¿puedo tener…?” is a way to ask permission to possess something.

If you’d like to order something, poner is the most common verb used in bars and restaurants in Spain. In other countries, it’s also common to use dar in this context.

I hear this one a lot, too! “Él está bueno” means “He is sexy!” But if you say “Él es bueno,” you’re saying that he is a good person, or that he is particularly good at something.

Or maybe you’re trying to say “he’s doing well.” In this case, you’d never say “él es bien,” which is another common error. Bien only works with the verb estar, so the right way to say it would be: “él está bien.”

To sum that up:

Using ser and estar correctly can be very tricky for non-native speakers. They’re probably one of the most common sources of mistakes for Spanish learners. Even if you haven’t quite grasped the nuances between them, native speakers “just know” the difference. If you use the wrong word, confusion or an awkward situation may await you.

So, have you already made these kinds of mistakes in conversation? Or said one thing, when you meant something entirely different? If so, please do share in the comments below!

Watch: 7 Common Spanish Mistakes to Look Out For

You can also find all of Mirari’s tips in her video. She was nice enough to record it in English, but subtitles are available in French, German, Italian, and Portuguese. Just click the “Settings” gear at the bottom right to change the language of the subtitles or to modify the playback speed.

if you enjoyed this article, here are a couple of others that we think you’ll find interesting: