nuqneH! This is a common greeting… in Klingon*. What do you mean you don’t speak Klingon?! Even if you don’t speak it, you’ve most likely heard of Star Trek. It’s the language spoken by the Klingon aliens in this fictitious world. Klingon is what we call a “constructed language” (or imaginary, invented, or made-up languages), along with others like Dothraki and Sindarin. And believe it or not, constructed languages, or conlangs, like these are on the rise in the polyglot community! 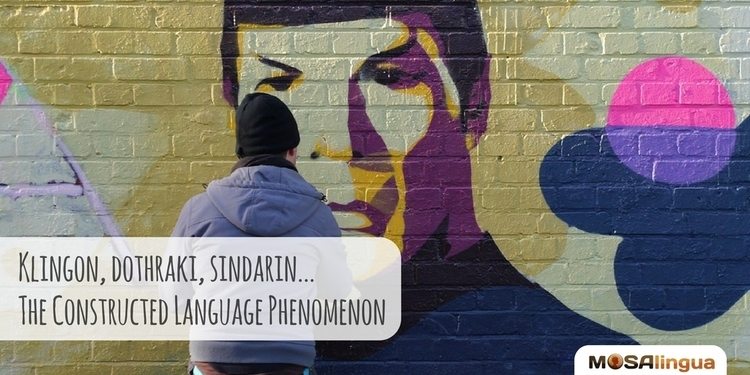 Where does Constructed Language Come From?

A galaxy far, far away… (thank you, Star Wars). But in all seriousness, linguistics can be broken down into what we call “natural language” (like English, French, and Spanish) and what we call “constructed language.” Some examples of the latter include: Klingon, Sindarin, and Dothraki. Do any of those ring a bell?

They aren’t languages that are attached to a particular country or area of the world, but they are real languages. They were all created, or constructed, by authors or filmmakers for a novel, movie, or TV series (generally in the sci-fi or fantasy genres). Here are some more examples:

All of these languages were made up in order to make a completely fictional universe (in a movie or TV series, for example) seem more realistic, to give it depth, and a certain “credibility.” Some authors don’t just create races or communities of people or creatures, but go as far as to imagine the language they use. While this phenomenon is becoming more and more popular in books, movies, TV shows, and video games, the term constructed language isn’t limited to these contexts. Other artificial languages just for fun, by ordinary people (like Ithkuil, created by John Quijada), or by people called conlangers.

Most languages that appear in movies and books were actually created by or with the help of conlangers. These are linguists, real language experts. Conlangers are able to use their knowledge of existing languages to create something completely new, including a unique alphabet, syntax, grammar, and even conjugation system. So, what difference do we make between constructed language and natural language?

Constructed languages are often developed to respond to a particular need, such as social cohesion, as is the case for Esperanto, or in order to create a particular identity. It can take several years to develop constructed languages – John Quijada spent thirty years working on Ithkuil! Natural languages also evolve over the years, but they do so on their own, and over much longer periods of time.

These languages do not necessarily have a goal, and are rather spontaneous; they are not thought-out using the same processes as constructed languages. People generally say that artificial language sets out its rules before it is put into use, whereas natural languages’ rules develop as it is being used. That said, most natural languages developed from existing languages that underwent significant evolutions and transformations (like how all of the Latin-based languages share the same roots). The main difference is that one language is planned, and the other is not.

But does this mean that languages like Klingon can’t fall under the modern language category? I’m not so sure… We often define modern languages as syntactic constructions that allow people to communicate and identify as a group. If Klingon really is spoken by some 2,500-odd people around the world, who communicate amongst themselves thanks to this made-up language, and who, I assume, consider themselves part of a community of Star Trek fans, how can we say that it isn’t a true modern language?

Yep, there are probably around 2,500 Klingon speakers in the world today. Surprising? Not particularly. It is quite common for fans to want to learn these languages, constructed by their favorite authors, to reinforce their sense of belonging in a community. Speaking Klingon, Dothraki or Sindarin makes you part of a unique community, in the same way that speaking, say, Spanish does!

This growing popularity means that books, websites, online courses, and apps for your phone or tablet to help teach yourself constructed languages are becoming easier and easier to find. And who knows, maybe someday MosaLingua will offer an app to help you learn a constructed language… In the meantime, check out these other resources to get started.

For Lord of the Rings Fans:

As of now, constructed languages aren’t taught in schools. However, the growing number of resources available on the Internet and on mobile apps make it easy to teach yourself vocabulary, grammar, and other aspects of these artificial languages. Leave us a comment below about the languages you’d like to learn – constructed or natural. 😉

*In case you were wondering, nuqneH actually means “What do you want?” but this is how Klingophones greet one another. I don’t think that greeting would go over too well in English!