For an exhaustive explanation of the difference between Spanish accents, we’d need to write a whole book; today, we’ll only be helping you choose which one you should learn. You see, Spanish is spoken in quite a few countries (21 officially), all with different accents and different word usage. Not only that, but all of these countries have different regional dialects, too.

Don’t let that discourage you… English is worse, and we’re (mostly) fine with the variety of our accents. Not only is British English very different from American English (not to mention Nigerian English!), but the English spoken in Texas is different from the one spoken in Washington. It’s the same with Spanish, although one language, there is variety within it. And depending on your wants, needs and personal taste, and before going too far in your studies of this beautiful language, you may want to choose the right Spanish accent for you.

Here’s an overview of some the difference between accents of Spanish, and a little help for helping you choose the right one to learn. 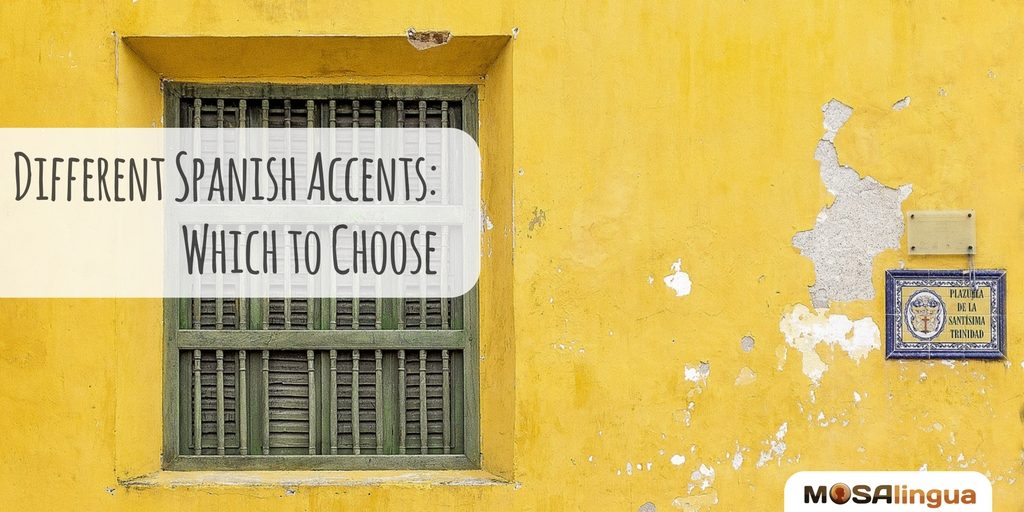 The Difference Between Spanish Accents in Various Countries

In order to choose the right Spanish accent, let’s have a look at the difference between the accents of Spanish around the world (highlighted in the map below).

However, bear in mind that some characteristics found in some countries can be found in other countries and that all Spanish-speaking countries have various accents across their country.

Argentinian Spanish uses voseo. Voseo is an older form of tú (you) which has different, although not very, verb endings than tú; it is similar to having a country still using the old English ‘thee’.
It is also easily recognizable for its pronunciation of the double ‘ll’ which is normally pronounced as ‘y’ (as in ‘yes’) in the rest of Spanish-speaking countries. For example, people in most Spanish-speaking countries pronounce llover (to rain) like ‘yover,’ Argentinians pronounce it ‘shover.’

For a taste of the Argentinean accent, play the video below:

Having trouble remembering llover? Picture a woman kissing her lover (llover) in the rain. For more tips like this, read our article about the tricks you can use to memorize words.

Considered by many to be the easiest to understand for learners because of its clear pronunciation, Castilian (here referring to the Spanish accent used in central and northern Spain) pronounces the letter ‘z’ and the ‘ci’/’ce’ combination as we do with the English ‘th’ (as in ‘thanks’). The same goes for words that end in the letter ‘d’. Another characteristic of Castilian is its use of vosotros, which is the informal form of ustedes.

Watch the following video to hear a clip with Spanish accents:

Mexican Spanish is easily recognizable because of how it marks a tone at the end of the last word of every phrase (a bit – but not exactly – like when asking a question), and because of how it reduces accentuation on certain vowels. Mexican accents are much more melodious forms of Castilian Spanish and are fairly easy to learn.  In what is considered standard pronunciation in Mexico, ‘s’ becomes ‘z’ before a voiced consonant (e.g. “es lo peor” becomes “ezlo peor”).

If you want to learn how to speak Spanish with a Mexican accent, check out this video:

Saying that someone has a Colombian accent isn’t being the least specific, as Colombia has quite a few different Spanish accents. However, the one seen on TV is considered to be an easy accent to learn for beginners because it is quite neutral. In particular the accent from Bogota. It is a very understandable accent even for those from other countries (Telenovelas have probably contributed to this). Since most people from Spanish-speaking countries can understand it easily, it’s a good one to choose.

To hear the Colombian accent, have a look at the clip below:

Cubans don’t always pronounce the ‘r’ like other Spanish speakers, sometimes pronouncing it as an ‘l’ when at the end of a word (amor becomes amol). And sometimes, both the ‘r’ and the ‘s’ are aspirated, giving something close to an ‘h’ (largo becomes lahgo).

Which Spanish Accent Should You Choose?

Obviously, we can’t answer this question for you, but here are three questions to help you decide:

Whatever accent you end up choosing, remember not to stress too much about it. In any case, you will be understood all around, and remember: the most important thing is to keep your language learning enjoyable and to start speaking it, no matter what accent you end up choosing! Let’s wrap up this article with a fun video of some hilarious imitations of many common accents…