Did you know that Spanish is the second most spoken language in the world? So it’s about time you brushed up on your skills! Let’s start at the beginning with the Spanish alphabet and its pronunciation. We’ve already written a Spanish Pronunciation Guide with all the tools and advice you need to get started. But there’s much more to cover! In this article, we’ll give you an overview of the letters and sounds of the alphabet—the building blocks of language. Then, we’ll have a look at 10 different facts that make the Spanish alphabet unique. 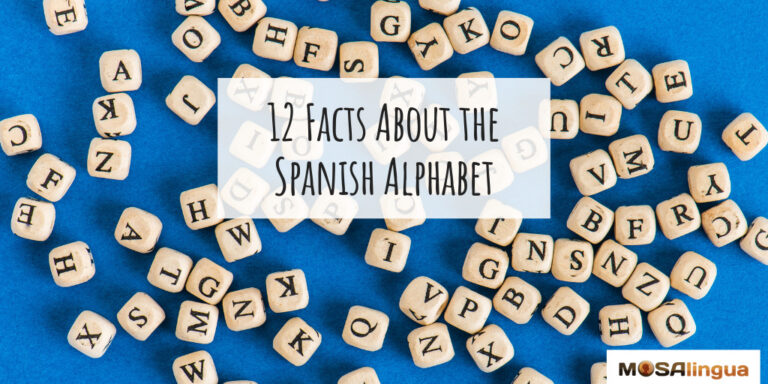 Review of the Spanish alphabet

Good news: it’s pretty easy to learn the Spanish alphabet! We know better than to say that learning a language is easy… but in this case, there’s a lot of overlap between the English and Spanish alphabets. Have a look at the table below:

Most of the letters look and act just about the same as they do in English. But if you counted them, you might have noticed that there is one more than you’re used to: the letter Ñ. But this isn’t where the differences end! Have we piqued your curiosity yet? Keep reading for more interesting facts.

The letter Ñ hasn’t always existed. Long ago, scribes used to write words like “año, señor, doña…” with two N’s, but over time, this evolved into a new single character. Today, “la Ñ” is an individual letter – and it’s not unique to the Spanish alphabet! It can be found in several other languages, including Breton, Tagalog, and many others.

One final fun fact about the Ñ – you can save this one for trivia night! The curved line above the letter is called la virgulilla.

The letter H is silent in Spanish. It’s possible that this letter might evolve out of the Spanish alphabet, as has happened to a couple of other letters (keep reading to find out more!)… But we’re not quite there yet. Though silent, this letter does still serve some special functions. For example, it can serve to reinforce the pronunciation of surrounding vowels, as in the word “ahí” (there). In this case, the A and I are accented with a little extra stress on each sound.

V is pronounced “B”

In Spanish, there is technically no difference in the pronunciation of the letters B and V. Both are pronounced [b] like the letter B in English. So how can you tell them apart? If you listen closely, there’s a slight difference in intensity. The B is “explosive” (say the word “bombe” for example). There is a bit more pressure behind the lips when pronouncing a B. To pronounce the letter V, on the other hand, close your lips in the same way, but let the air through with less force (say the word “vaca” for example). But be careful! Your teeth should not touch your lips, as they do when pronouncing the letter V in English.

Even native Spanish speakers can have trouble differentiating between these sounds, so there’s a good trick to use when spelling words out. The letter B is referred to as “be grande” or “be larga” and the letter V is referred to as “ve chica” or “ve larga.” So you can spell the name Evelio as “e, be chica, e, ele, i, o.”

One benefit of Spanish pronunciation is that all letters are pronounced! (Except for H, as mentioned above.) There are also lots of cognates with English, like “pharmacy” and “farmacia” for example. There are also a few patterns that you can trace in spelling, where you can see that the Spanish word is simplified. Ph becomes F, Th becomes T, and Rh becomes R. Have a look at these examples:

Spelling reforms have determined that there should be only one official name for each letter. But you may still find additional names for the letters I, U, W, and Y.

In the table above, you can see the different names (and their corresponding pronunciations) for each of these letters. Sometimes a letter has multiple names. An asterisk marks the names officially recognized by the Real Academia Española. They are uve (V), uve doble (W), ye (Y) and i (I).

W can even have several names, depending on the country or region: uve doble, ve doble, doble uve, doble ve, or doble u.

In the past, the letters R and Z have also had different names in the Spanish alphabet. Today, however, there is only one accepted name for these letters: erre (R) and zeta (Z).

In Spanish, the letter Q is always followed by “ue” or “ui.”

Fun Facts About the Spanish Alphabet

In English, we simply don’t assign “gender” to nouns. But in Spanish, each letter in the alphabet is treated as a feminine noun. So, when referring to the letter, you’d say “la B de ‘bebe.'”

💡 MosaTip: Here’s a trick to help you remember this fact: the word “letter” is feminine in Spanish, too (la letra)!

Recent changes to the alphabet

If you learned Spanish before 2010, you might disagree with a fact we mentioned earlier – that the Spanish alphabet contains 27 letters.

There’s a simple explanation, though! Before the spelling reforms instituted in 2010, the alphabet contained 29 letters. Two have been eliminated: the “CH” and the “LL.” The letter CH came right after the C, and the LL followed the L. The debates surrounding these letters actually started as early as 1994, when the Real Academia Española ruled that these two letters were digraphs rather than individual letters.

The most common letter

In Spanish, the letter E is the most commonly used, just like in English. Next are the vowels A and O, then the consonants S, N, and R. This isn’t too surprising, considering that many masculine words end with the letter O, and that many feminine words end in A. And of course, S is the letter used to pluralize words.

And as for the three least common letters, they are X, K, and W. No surprise here, either, when you consider the fact that W isn’t technically considered part of the Spanish alphabet. It’s only used in words borrowed from foreign languages (mostly English or German), like “sandwich.”

Who is this Caroline that Spanish teachers are always talking about? She’s actually a mnemonic device to help you remember which consonants can be doubled in Spanish.

In English, just about any consonant can be doubled, but only four can in Spanish! They are, of course, C, R, L, and N, as in the name “CaRoLiNe.”

The longest word that can be found in the Spanish dictionary is “electroencefalografistas” (24 letters).

The English translation would be something like “the person who performs electroencephalographs” (a procedure that records electric activity in the brain).

Do you know what a pangram is? A pangram is a phrase that contains all the letters of the alphabet.

Of course, in Spanish, there’s a question of which alphabet you’re using. As you now know, until recently, the Spanish alphabet contained 29 letters. But the Real Academia Española has stated that a pangram should seek to contain the current 27 letters of the alphabet (excluding CH and LL).

🦇 And though it’s far from being a pangram, the word “murcielago,” (bat) is one of the rare words that contain all five vowels!

Bonus video: How to pronounce RR

Naturally, this video is in Spanish. But, if you want, you can enable subtitles in Spanish, English, or four other languages. To do so, just click on the gear icon in the bottom right corner of the video! Or, if you prefer, you can also watch the video directly on our YouTube channel!

More About the Spanish Language and Vocabulary

Now that you’ve mastered the basics, take your Spanish studies to the next level! Here’s some recommended reading:

Filed Under: SpanishTagged With: spanish pronunciation