Hey, this is Cédric from MosaLingua! Today I’m going to reveal “verlan” slang expressions so you can sound cooler when you speak French. “Verlan” is when a word’s syllables get switched. “Verlan” is slang for “l’envers” (backward). Here’s how the word was formed: “verlan”: l’envers <=> “vers-l’en”. Easy, right? 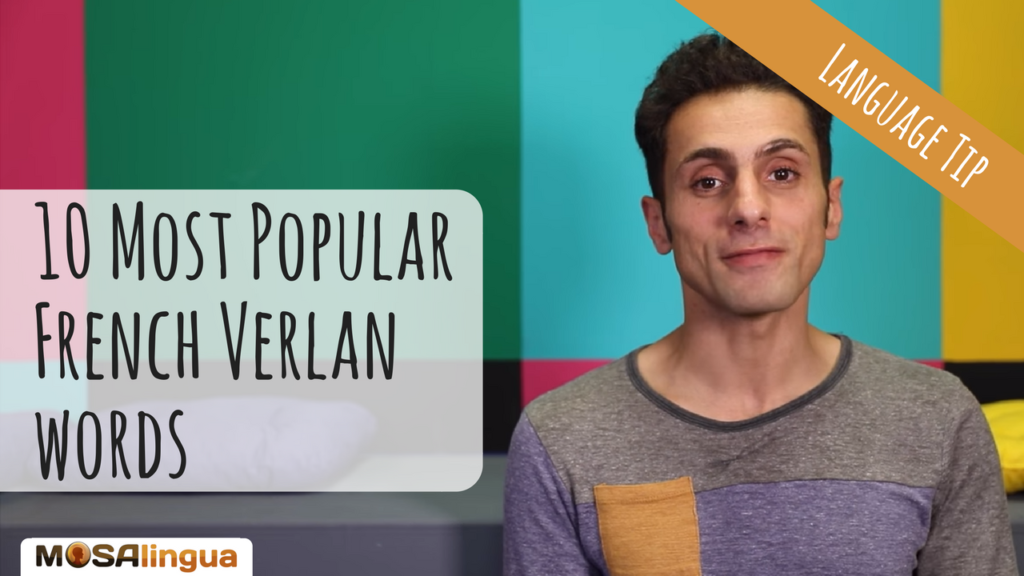 Watch Cedric’s video to hear how these popular French slang words are pronounced, or read the recap below.

But you need to be careful with verlan, because you can’t use it all the time. For example, we use the word “meuf” (femme <=> meuf) when referring to a girl or group of girls. It’s the most common verlan word, but it can come off as quite sexist, depending on the context. Like if you said: “Comme elle est canon cette meuf !”

You can also use verlan with other slang words, like “mec” (mec <=> keum), when talking about a boy or boyfriend. If you’re talking about the same woman:  “C’est vrai mais elle a déjà un keum !”

Verlan even works with very short words. For example, “fou” becomes “ouf” (fou <=> ouf). You can use this word to talk about a crazy situation or person. For example: “Il paraît que son keum n’a peur de rien, c’est un vrai ouf !” Most of the most common slang words have a verlan version. “Choper”? You got it: “pécho.” This means “to get,” but it can also mean to seduce someone. “Il a pécho sa meuf dans le métro ce ouf !”

Sometimes, a syllable is dropped. In “véner,” which comes from “énerver,” dropping a syllable makes it easier to pronounce. “Comme je suis trop véner, je la kiffe bien sa meuf !” When you’re first getting the hang of it, you shouldn’t try creating your own verlan – stick to the words that are already well known. “Chelou” is more frequently used than “louche,” for example, which means that something or someone is strange or shady. “T’es chelou toi, t’as déjà une meuf, non ?” Verlan evolves quite quickly.

When people began saying “méchant” to mean “cool,” they also started using its verlan: “chanmé.” “Oui mais je kiffe son style, il est trop chammé !” Most verlan expressions come from slang, like “relou” which comes from “lourd” and means annoying or frustrating (it has nothing to do with weight!).

Verlan is usually used for exaggeration. “Zarbi,” verlan for “bizarre,” is slightly stronger than “bizarre.” You could use it to say that a boy is weird: “Et toi, je t’ai jamais vu avec une meuf, c’est trop zarbi !”

One last tip be careful about when you use verlan! You could come off as somewhat rude if you use it with a person you don’t know. Like the word “zonmé” (maison = house). Avoid using it with strangers! “C’est toi le zarbi ! Allez viens, on rentre à la zonmé”. There you have it, common verlan expressions.

I hope you liked this video – feel free to post your questions in the comments section. It’s time for me to go back to my “zonmé” now, so give this a “like” and subscribe to the MosaLingua channel. And if you want to learn more French slang, click the link below. See you later!

Filed Under: FrenchTagged With: video vocabulary