As you may know, German pronunciation can be very different from English. But it’s not too difficult to master, once you get the hang of it. It also never hurts to familiarize yourself with the pronunciation of one of the most widely written languages in the world. Once you’ve learned the sounds, the German alphabet shouldn’t hold any more secrets for you. But here at MosaLingua, we do love to surprise our readers! We’ve put together a little list of fun (and useful!) facts about the German alphabet. Are you ready? Los geht’s! 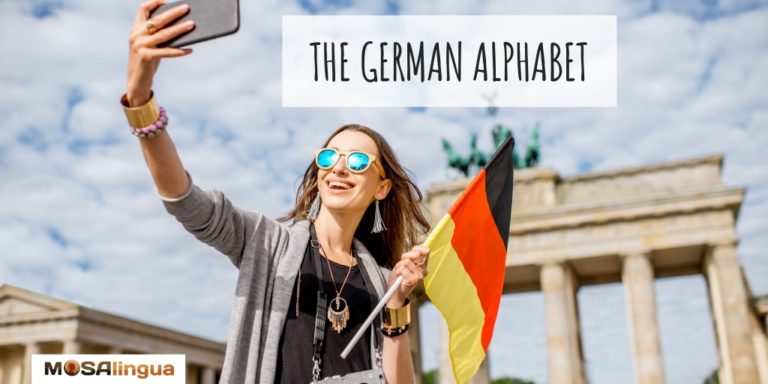 The German Alphabet: A to Z

Let’s start with a brief review of the alphabet in German. Just like English, there are 26 basic letters. But there are also four additional characters that don’t exist in English:

How to pronounce the German alphabet

11 letters are similar to English

When you’re learning a language, it’s always useful to take stock of the similarities with your native language. The German alphabet has a handful of letters that function very similarly to their English equivalents: B, D, F, G, K, L, M, N, O, P, and T. This will give you a bit of a head start on pronunciation and memorization.

A few differences to note are the pronunciation of vowels and certain consonant blends. Have a look at the tables below for more explanation:

Have you ever noticed that some Germans speaking English have a tendency to pronounce the letter W as a V? This is definitely true of stereotypical impressions of German accents. But where does that come from? In German, the letter W is simply pronounced /v/ (the same as the English pronunciation for the letter V).

All letters are pronounced

Similar to Spanish, German is relatively easy to read because all the letters are pronounced. So if you’ve learned your alphabet well, you should be able to read written German pretty quickly. No need to worry about lots of silent letters or letters that combine to make different sounds. As you’ll see below, there are some common combinations, but the letters will always be pronounced individually. In German, the rule of thumb is to pronounce everything!

As I just said, all German letters are pronounced. Except in the case of diphthongs (a combination of two vowels that form a new sound). A few English examples of diphthongs would be “cloud” or “voice.” In German, there are 5 different diphthong sounds: 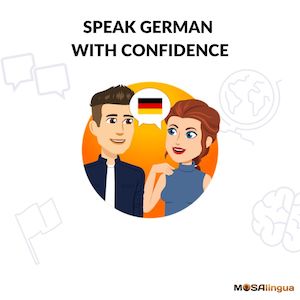 Do you want to improve your spoken German?
Good news: we have a course for that! The Speak German with Confidence MasterClass.

It’s a comprehensive 8-module course designed to help you improve every aspect of your spoken German – fluency, confidence, pronunciation, and more – step by step, and enjoy doing it.

We defined diphthongs as combinations of different letters, but these are not the only combinations found in German. In fact, doubled letters are quite common, both for vowels and consonants.

The sound of some consonants changes based on their position within a word. That is, the letter won’t have the same pronunciation if it comes at the beginning or end of a word. It might also change if its placement is before or after a vowel.

Have you ever heard of a radio alphabet? If you’ve seen any war movies, you’ve probably heard one used (Charlie, Foxtrot, Tango, etc.). A radio alphabet, or phonetic alphabet, is a version of the alphabet that assigns entire words to each letter to help speakers communicate more clearly. The German language has its own version, of course: Buchstabieralphabet. So, if you ever find yourself needing to communicate letters on the phone (because let’s be honest – that’s probably more likely than by radio), you can use these words to make sure your message gets through loud and clear.

There have been a few recent changes to this version of the alphabet, but the image below reflects the new German military alphabet, which is also called the “official spelling alphabet.” 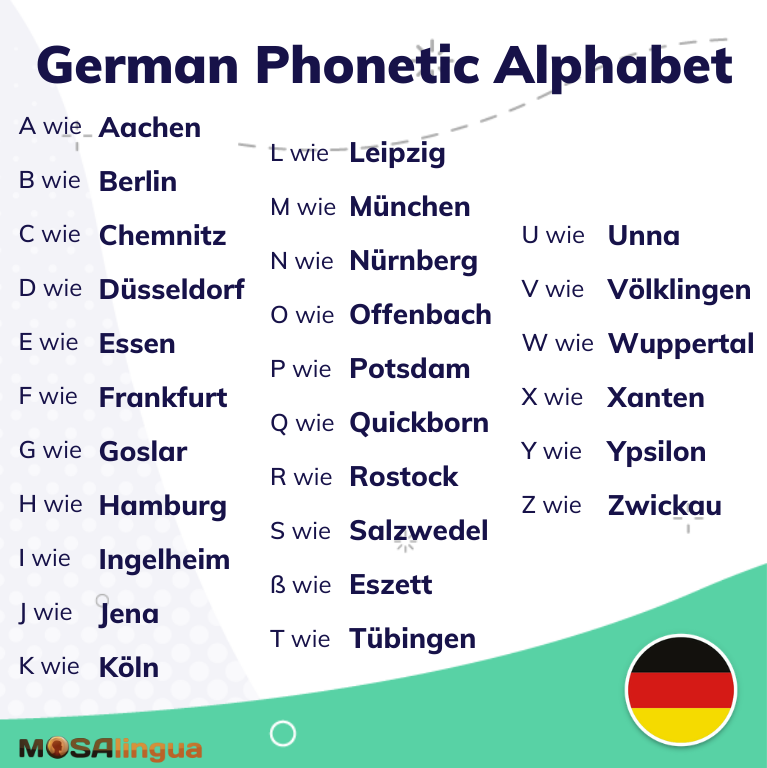 📌 Use the red Pinterest button at the bottom of the page to save this image to your German learning board for later!

The most used letter

If I told you “The five boxing wizards jump quickly,” you might have a few questions about what’s going on. This sentence is just one example of an English pangram – a sentence that contains all letters of the alphabet. Whether it makes much sense or not doesn’t really matter. Here are a couple of fun German pangrams to impress your friends with:

And another one that uses all four special characters in German:

It’s not uncommon to fit all the letters of the German alphabet into a funny pangram. But did you know that you can also get pretty close to finding every letter in one German word?! Due to the structure of the language, which features many compound words, you come across some very (very) long words. You’ll find a lot of them in the legal sector, especially.

To finish this article off, I present to you the longest word in the German language. I’ll leave it up to you to count just how many different letters there are!

Which of these fun facts about the German alphabet was the most surprising? Let us know in the comments!

If you enjoyed this article, check out: