For lots of learners, the “rolled” or “trilled” Spanish R is a real nightmare! First, because it’s quite different from the sound we are used to in English. But also because there are two different ways to pronounce the letter r. But never fear, Mirari, our Spanish teacher, is here to explain (and show you) exactly how to roll your R in Spanish. She has 5 techniques, plus some tips and exercises you can try at home, to get you rolling like a pro in no time. Mastering this one sound can make a huge impact on your overall Spanish pronunciation. 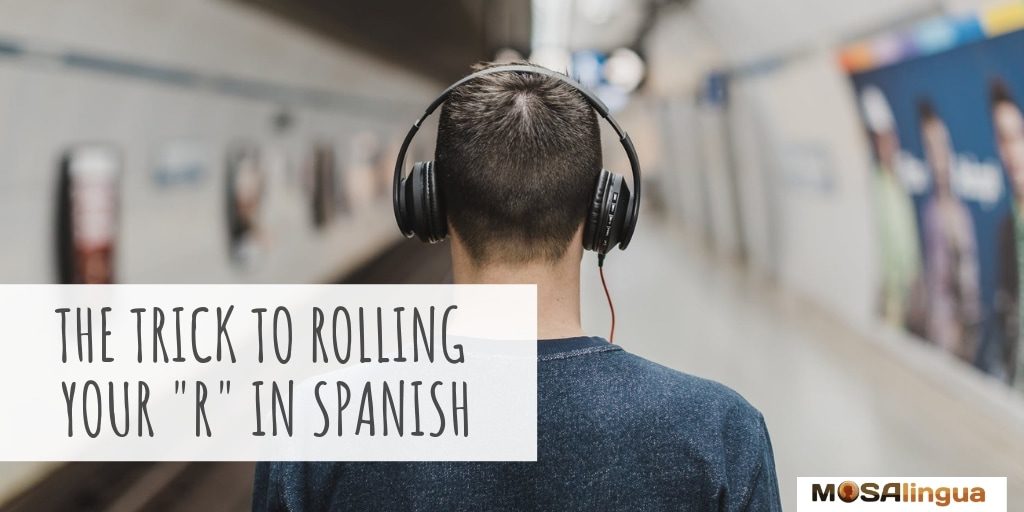 5 Tips for Learning How to Roll Your “R” in Spanish

If you want to master this sound, and every other aspect of Spanish pronunciation, download our Spanish Pronunciation Guide:

Our Complete Guide to Spanish Pronunciation includes all of our best tips, tools, and techniques for improving your Spanish accent. 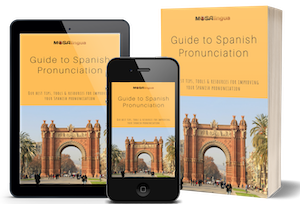 Get your FREE guide

Before we show you how to roll your r’s in Spanish, you should know that there are not one, but two different /r/ sounds: the single /r/ (the symbol ɾ in the IPA) and the double /r/ (r in the IPA).

Usually, the single /r/ sound is easier to pronounce, because it’s a lot like the /r/ sound that exists in other languages. That being said, there are a few steps to take to pronounce it correctly. And that’s the goal of today’s article. We’re going to explain step-by-step how to roll your r in Spanish.

1. Focus on the sound

The first step is to focus on the sound. Listen to it several times so that you know where your tongue needs to go. When you listen to a sound over and over and repeat it, you learn exactly which parts of your mouth you need to move to reproduce it correctly. Plus, it’s a really good way to learn new Spanish vocabulary.

Like I said, listening is super important. It might be a good idea to watch some Spanish videos on YouTube… lots of them! In doing so, you’ll also pick up new words. For more vocab practice, might I suggest our article on some of the most popular Spanish slang? You can also check it out in video form below. Judith has 10 popular slang terms from Spain to share.

To pronounce the /r/ sound like a real Spanish speaker it’s really important to know where your tongue should be. Put it close to the roof of your mouth, but not too close! Air should be able to easily move through the space between them. If your tongue is too close to the roof of your mouth, the sound will get stuck. And if it’s too far away, it won’t be able to create the right vibrations. The trick here is to let the tip of your tongue lightly touch the space right behind your top front teeth.

Another tip is to look in the mirror while you say it to see if your tongue, teeth, and mouth are in the right position.

Third tip, but perhaps the most important: relax your tongue. If your tongue is too tense you won’t be able to create any vibrations and your /r/ will sound more like a “d” than the trill you’re going for.

There are some easy exercises you can do to get it to relax. Once it’s nice and loose, find the correct tongue position from the previous step. When you roll your /r/, it will be in practically the same position as for the Spanish “d” and “t” sounds. Use these consonants to start practicing. Say the “tr” and “dr” sounds in front of a mirror; for example, say the word “tres” as slowly as you can and draw out the sound.

4. Get the air flowing

The next exercise will help you get the air flowing in your mouth. Air needs to flow easily between the roof of your mouth and your tongue if you want to create vibrations.

You need roughly the same amount of air as when you say the consonants “d” and “t.” Which of course you’re already familiar with from the previous step! You can kill two birds with one stone when you practice finding the right spot for your tongue and letting enough air flow through.

As usual, the final step is to practice, practice, practice. If you practice every day, you’ll get better, little by little. Another good tip is to choose a few key words and say them every day. I recommend starting with words like:

Of course, once you know how to correctly pronounce the /r/ sound, you can keep practicing with other words.

And soon, you’ll be spouting off even the most difficult Spanish words to pronounce like it’s nothing!

See How It’s Done: How to Roll Your R in Spanish

When it comes to pronunciation, videos usually speak louder than words. That’s why our Spanish teacher Mirari recorded a video for you to show you exactly how make the trilled /r/ sound. She also has some good exercises that you can do at home to practice. Click the video below to watch it, or head over to our YouTube channel. There are quite a few other videos on our channel that you might find interesting if you’re learning Spanish.

Mirari recorded the video in Spanish, so it’s a good opportunity to practice your listening skills. But you can also click the gear icon in the bottom right corner of the video to turn on subtitles in English (or even better, in Spanish).

We can’t stress it enough, so we’ll just repeat what Mirari said: don’t forget to practice!