Hi everyone, this is Mara from MosaLingua. Welcome to our Italian grammar hacks series to learn the language fast. Today’s topic is how to use the present tense in Italian. Learning the present is the best way to start speaking a language right away. 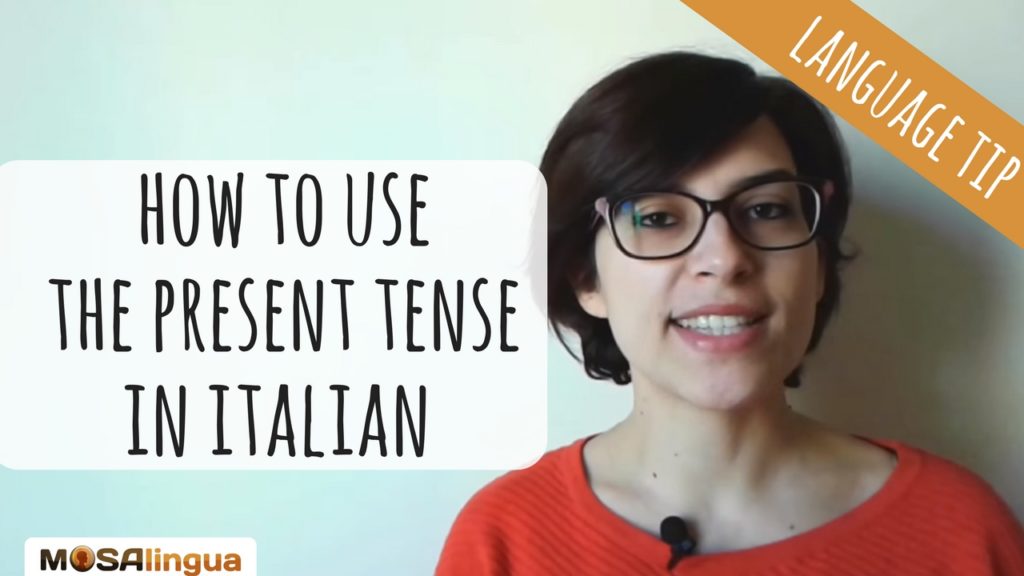 Watch Mara’s video below or on our YouTube channel (it’s in Italian but you can turn on the subtitles in your choice or 6 languages if you need them). Or, keep scrolling to read a recap.

How to Use the Present Tense in Italian (Transcript)

First, let’s look at some examples of the present tense in Italian.

Did you notice that in these 3 sentences, the first person of the verb always ends with a -o?

Below you’ll find all the details about learning how to memorize verb conjugations. For now I suggest that you focus on the first person (io), the second person (tu), and the third person (lui/lei). Let’s look at some examples of these three types of verbs. First, let’s conjugate a verb ending in -are. For the verb imparare (to learn): “io imparo l’italiano”, “tu impari l’italiano”, “lui/lei impara l’italiano.”

Next, we’ll take a verb ending in -ere. For the verb leggere (to read): “io leggo un libro”, “tu leggi un libro”,  “lui/lei legge un libro”. And for our third conjugation, we’ll take a verb that ends in -ire. For the verb partire (to leave): “io parto domani”, “tu parti domani”,”lui/lei parte domani”. And now let’s talk about some hacks to make your life easier when it comes to verbs.

Most of the time, you will use the first and second person of a verb, that is “io” and “tu”. The good news is that first and second person work the same way for all the 3 kinds of verbs, as you may have noticed. The first person plural, “noi”, is also the same for every case. Here are some examples:“noi leggiamo” (we read), “noi partiamo” (we leave), “noi scriviamo” (we write).

So, to sum that all up, persons that you’ll need to put in a bit more effort to memorize are “lui/lei”, “voi”, and “loro”. Only what we call “first-conjugation” verbs, those that end in -are, have a different vowel for the third person singular, “lui/lei”, and third person plural, “loro”. The second and third types of verbs stay the same. Examples: “lei lavora”, “loro lavorano”.

The other two conjugations: “lui legge”, “loro leggono”, and similarly “lei parte”, “loro partono”. “Voi”, second person plural, is different for every conjugation but it is seldom used. With these tips, learning conjugations will be much easier. Remember that with these three forms alone you can communicate in many situations. I still have some useful hacks for you.

In Italian, you can not put the subject in your sentence (io/tu lei/il cane/il gatto and so on), while in many other languages, like English and French, it is mandatory. The third person also allows you to speak formally when you don’t know someone well. In Italian it’s called “dare del lei” (to address somebody as lei). So you can say “lei impara l’italiano?” Or “lei parte oggi?” Easy, right?

In another video I’ll teach you the most useful irregular verbs to know. The present is the best way to start talking. If you don’t remember how to conjugate a verb just use the infinitive, your goal is to transfer a message. If I say “io andare al cinema di pomeriggio,” the sentence is grammatically incorrect but people will get the message all the same and that is what matters. Don’t give up! If you take it one step at a time, practicing and speaking as much as possible, you’ll be able to learn and remember all the verbs and their conjugations. Use all of the resources you have. They’ll increase over time and you’ll see that in no time you’ll know how to use the present perfectly.

Thanks a lot for watching this video. If you want to know more about how to learn and improve your Italian, see below. And if you haven’t yet, I highly recommend subscribing to our YouTube channel. Alla prossima, buon apprendimento! 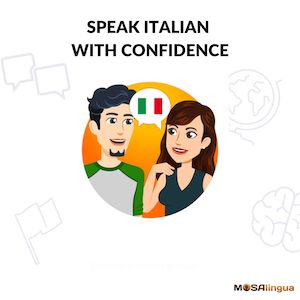 Do you want to improve your spoken Italian?
Good news: we have a course for that! The Speak Italian with Confidence MasterClass.

It’s a comprehensive 8-module course designed to help you improve every aspect of your spoken Italian – fluency, confidence, pronunciation, and more – step by step, and enjoy doing it.