Have you ever wondered how global leaders communicate during international summits? Today, the heads of the G7 countries speak five different native languages! Interpreters certainly play a role in communications, but these days English serves as the lingua franca for international relations. Today, we’re going to take a look at each of the G7 leaders for whom English is not a native language. Our English instructor Abbe has “graded” the English skills of Presidents, Prime Ministers, and others to see just how well our world leaders speak English. 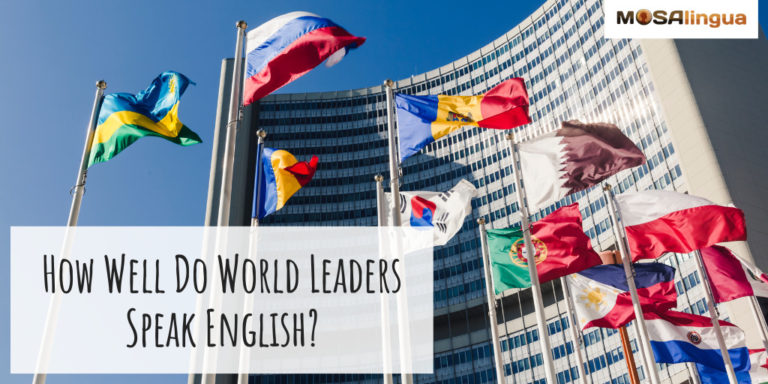 Before getting started, a little disclaimer: we’re not here to criticize or make fun of these people. We really admire anyone who puts in the work to learn a foreign language! Instead, the goal in analyzing their English is to find learner takeaways for you, so that you can learn something from them.

So now let’s listen to a few world leaders speak English and see what we can learn from each of these politicians. Because Abbe’s analyses are based on video clips of each speaker, we recommend that you check out her video below to follow along. You can also find it on our YouTube channel. The video is in English, but subtitles are available in English, French, German, Italian, Portuguese, and Spanish. Just click on the gear icon at the bottom right of the video screen.

First up is German Chancellor Olaf Scholz. Chancellor Scholz did not go to school in an English-speaking country like a lot of his counterparts. We haven’t heard much from him yet in English, since he was only recently elected. Let’s have a listen.

REPORTER: Do you think it’s possible to reach an agreement before the US election…with the US?

This is an easy strategy you can use to sound more fluent—and not just in English. It helps you build a more complete sentence, tells the speaker that you understood the question, and gives you a few extra seconds to think about what you’ll say next.

One critique is that his intonation is a bit flat and monotonous in some spots. In English especially, our voices go up and down a lot to convey emphasis or emotion, or to mark the end of a thought. German is usually more measured, and the pitch range in German is a little bit narrower than in English. Because English speakers rely on intonation like a roadmap, it’s easy to get lost in what he’s saying.

Next up is another leader who is relatively new to this group: Mario Draghi, Italy’s Prime Minister since February 2021. Prime Minister Draghi earned a Ph.D. in Economics from MIT, one of the most prestigious schools in the United States, in the 1970s. Since then, he has held quite a few positions in or with close ties to the US. So let’s find out how well this background is reflected in his English skills today.

DRAGHI: …furthermore, when we look at the banks over all the Eurozone, we see that their profits last year actually went up, and this is the first year when interest rates had been negative. And even the return they had from the net interest income also increased, which says basically that the category, overall, did well. And within the category, of course, we have weak banks and strong banks.

He clearly knows his economics terminology, and he seems quite comfortable speaking in English. He uses transition phrases, like “furthermore” and filler words like “basically” and “of course” effectively, which makes his English sound overall pretty natural.

In terms of mechanics, his “th” sounds are great. This is something that a lot of learners struggle with.

Something Draghi does a little bit less well in this clip: vowel sounds. Italian vowels are big and round, so his accent is more pronounced when he says words like “up,” for example. An English speaker’s mouth is only somewhat open when we say “up,” but his is wide open: “aahp.” He also struggles with some other minimal pairs, for instance /ee/ and /i/ as in “did,” and “interest,” which he pronounces “een-trest.”

One thing you can learn from Mario Draghi’s English is that mastering just two or three English sounds can drastically improve the way native speakers perceive your pronunciation. Working hard on your “th” sounds is always a good priority. (MosaTip: One fun way to practice your pronunciation is to work on tongue twisters.)

Next up, Emmanuel Macron of France. The French president never studied in an Anglophone country, but he did have a great-grandfather who was English! He gives a lot of interviews and speeches in English, unlike his predecessors, which to me shows a lot of courage. But does practice make perfect? Let’s have a look.

MACRON: Ahh…look, we are catching up. And definitely we are vaccinating more and more people; we vaccinated more than 12 million people. We have, mid-May, the objective of 20 million; 30 million, mid-June. And at the end of the summer all the adults will be offered a vaccine. Which means that we are progressing and we will progressively lift the restrictions after the beginning of May…

Emmanuel Macron is a confident speaker. So even though his English is far from perfect, it’s not painful to listen to. He gets people so interested in what he’s saying that we don’t focus so much on how he’s saying it. Confidence goes a long way!

Macron uses some French sentence structures, which shows that he’s probably thinking in French and translating his thoughts into English on the spot, rather than thinking in English. The more native speech you listen to, the easier it is to think like an English speaker.

Also, he has French-sounding pronunciation for cognates. Cognates are words that are similar in two languages, but they usually have slightly different pronunciations. In this clip, we heard “progressively” and “restrictions.” We know that he can make a good English “r” sound, because we heard it in other words, so his pronunciation is probably being influenced by similar-looking French words.

If there’s one tip for learners based on this clip, it’s to make sure that YOU don’t fall into the cognate pronunciation trap that Macron does. Just because it takes less effort to learn the meaning of these words doesn’t mean you should neglect learning proper pronunciation!

And finally, the Prime Minister of Japan, Fumio Kishida. Kishida actually moved to the United States for about three years when he was a child, because of his father’s job. He went to public school in New York City. Let’s find out if he kept up his English skills!

KISHIDA: A country regarded as reliable by another country will not lose that status overnight. And this is because winning another country’s trust takes time and concrete actions, as well as words.

Overall, Kishida’s pronunciation of individual words is quite accurate. He takes the time to enunciate, so his message gets across clearly. It also helps that his speech is well-written!

Unfortunately, I couldn’t find a clip of him speaking more spontaneously. (Some world leaders speak English only in prepared speeches.) The main issue I have with Kishida’s English is that it’s choppy. He pronounces every word separately and doesn’t connect them like a native speaker would. You might think this would make your speech clearer, but in fact, it just makes you sound robotic. It would be difficult to sit through an entire 30-minute speech that sounds like this.

Now, this could be because he isn’t very familiar with the text he’s reading. So if you have an English speech or presentation coming up, be sure to practice, practice, practice. In front of a native-speaking conversation partner, if possible!

If you find that your own English isn’t very smooth, work on linking. Especially if you’re an intermediate or advanced learner and already have a good-sized vocabulary, listening to a lot of native content in English and practicing with targeted exercises will help you understand when to join the end of one word to the beginning of the next.

Hopefully this analysis of how well world leaders speak English has been helpful to you! Of course, we skipped over the other three leaders of G7 countries: Boris Johnson of the UK, Justin Trudeau of Canada, and Joe Biden of the US. All three of them speak English as a native language (and Justin Trudeau is perfectly bilingual in French, too).

However, I do want to point out that Joe Biden has some trouble with spoken English, because he has a stutter. If he was able to overcome those speaking challenges and become the President of the United States, YOU don’t have any excuses!

We’re confident that you can overcome any fears or embarrassment about your own English skills. And if you need a boost, be sure to check out our Speak English with Confidence MasterClass.

If you enjoyed this article, here are a few others that you might find interesting: