You’re already well aware of our passion for studies on how foreign languages affect the brain. It’s easy, we can’t get enough of it. Another fascinating, yet controversial, study has piqued our interest lately: is it possible to learn a language while sleeping?

Apparently, according to various studies, we are able to assimilate vocabulary and put it in our long-term memory during sleep. Although rather skeptical—especially at first—we decided that, instead of merely reading about these studies, we would join the club and test it ourselves with our apps!

This test starts today, Monday, September 5th, 2016, and it will go on for the whole month of September. MosaLingua, always innovating the best techniques for you 😉 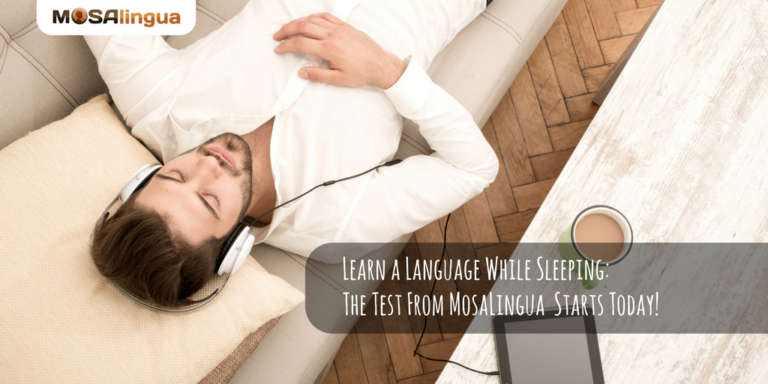 To Learn a Language While Sleeping (Hypnopedia): Studied by Numerous Universities…

The importance of sleep for memorization is nothing new. It’s well known and accepted. But to learn a language while sleeping is something else…  This is called hypnopedia, a subject which various research teams have been working on. Among those, we can mention the study conducted by Anat Arzi in 2012* which demonstrated that memorization, in particular sensorial memorization, was relatively efficient during sleep. Additionally, the Northwestern University published a study in Nature in 2012, demonstrating that it was possible to reactivate information learned when awake during our sleep.

But the one that particularly caught our attention was a study conducted by Thomas Schreiner and Björn Rasch from the University of Fribourg in Switzerland*. From the results of the study conducted on two groups of people, one group asleep and another awake, these researches demonstrated that it was not possible to learn new (unknown) words during sleep. But that being exposed to a word during our sleep—a word we’ve previously been exposed to—helps us memorize it with less effort than when we are awake. It is thus possible to improve our memorization of words we’ve already been exposed to during a precise phase of our sleep.

Interesting, right? That’s what we think. But, this time round, instead of just following the latest news on the topic, we wanted to conduct our own research by creating and launching a beta version—for the time being—of a special sleep mode on our MosaLingua apps for learning and revising words while sleeping.

… And by MosaLingua. How Does Our Study Work?

We’ve just launched the test, today, Monday, September 5th, 2016. Just in time for the beginning of the academic year. This “test” is a learning method implemented (currently in beta version) on our MosaLingua apps. Nothing changes regarding our learning technique, which mixes both active learning and regular coaching, this is just a supplementary learning method. An option, in other words.

From today, and for two weeks, this option is available to try out for some of our users. We’d like to give a big thanks to these volunteers! They will thus be able to use the app and test this new “sleep mode”. Sleep mode works for learning new words and, especially for the framework of this study, for the revision of vocabulary already seen/learned.
You might be asking yourself “how are they going to catch any sleep with a voice constantly saying words?”. Sleep mode is not active all night long. They will have to set up the option for it to be active during slow wave sleep. A phase which lasts 90 minutes and only occurs after falling asleep. It’s the ideal phase fir this (according to the teams of researchers previously mentioned) because we are not disturbed by external noise, yet our brain is still active and vigilant. Additionally, the volume is very low, these words are basically whispered (a bit like with ASMR, ever heard of it?). The app thus offers repetitive audio recordings with the volume set really low and for 10 minutes only.

During the next 15 days, nobody will decrease, nor increase their sleeping time. After the test is over, we will evaluate the performance of each of our users to then be able to see their evolution, performance and differences. We’ll then truly be able to answer this question: is it possible to learn a language while sleeping?

No need to tell you how excited we are about this new study and how impatient we are to reveal its results. We’ll talk more about this in October on this blog with the results. As for us, we’re off to sleep… Work! I meant work!