French is a beautiful language. French is romantic, sexy even. Knowing French opens doors to parts of Europe, Africa, North America, and even Oceania and the Middle East. Being able to put French on your resumé can help you get a great job. But let’s face it: French can also be incredibly frustrating. The French language has certain vocabulary words that are just horrible, for various reasons. Some have to do with the odd way they are conjugated (hello, irregulars), some are only pronounced using half of the letters that are written, and some are just plain false friends. Here are a few of the annoying French words that we love to hate. 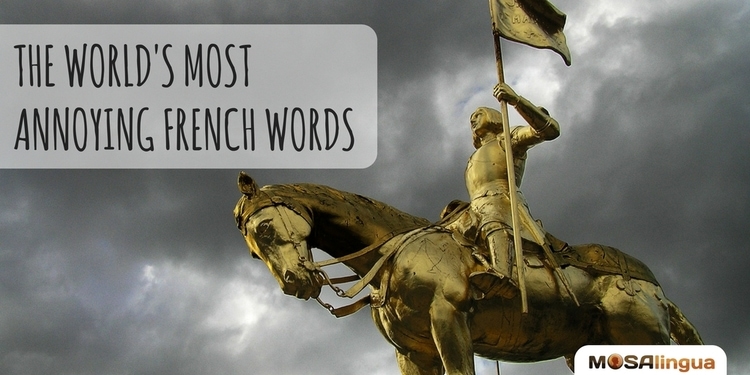 Thank god for the squiggly lines in Word. You know the ones I’m talking about, the red and green lines that pop up under words that are misspelled or grammatically incorrect. It’s a shame that these don’t exist in spoken language! It would be so useful to have automatic grammar (or pronunciation, for that matter) corrections during conversation. For now, we’ll just have to keep conjugating these nasty verbs incorrectly until we get to one that sounds right! (Luckily there are some easy ways to avoid these words until you’re ready to spend some time memorizing irregular conjugations.)

The only conjugation I can consistently get right is the vous form, which I heard yelled by various teachers at least 20 times a day in elementary and middle school…

This one gets especially tricky in the subjunctive, but you get good at it if you have to write formal e-mails (Veuillez trouver ci-joint…)

I believe that you can master these tricky verbs!

Naître (To be born)

Thankfully you don’t need to use any conjugations other than the past tense (né) very often.

Beginners tend to fall into the false cognate trap easily. These “false friends” are especially annoying because they look familiar. When you run across a word that looks like a word you know, it feels like a victory. But then you realize (or maybe you don’t – which is worse!) that it doesn’t make sense in context… Then you’re left wondering what the heck it actually means. ThoughtCo has a great list of false friends, along with their meanings in French and English. Here are some of the most annoying French words that are out to trick you.

Means “to be bored,” NOT “to annoy.” These words might be annoying, but trying to keep them all straight definitely isn’t boring.

Means “to attend,” NOT “to assist.” If someone asks if you’re attending the soccer game tonight, they’re not expecting you to jump in the game if your team is losing!

Means “middle school,” NOT “college/university.” You might get some strange looks if you tell someone you are in “collège” but are clearly in your twenties.

Mean “appetizer,” NOT “main dish.” Don’t expect to eat very much if you order one of these from a French menu.

French is notorious for its odd pronunciation rules. Especially when you get into everyday spoken language, French speakers tend to gloss over words, leaving out half of their letters. Unlike languages like Spanish, which is very straightforward in terms of pronunciation, French will take a little more time to get right. (English isn’t a piece of cake, either: colonel, really??) These words aren’t intuitive, so correct pronunciation will just take practice. Oh, and these are just the tip of the iceberg… Leon Warnant wrote a book of 12,000 words that aren’t pronounced how they are written.

Why aren’t these letters pronounced, in words like “ils mangent” or “elles parlent”? Just because.

Language learners are especially prone to developing verbal tics (inserting fillers every few words) when they reach an intermediate to advanced level. They’ve picked up tics that natives have, and in some cases believe it makes them sound more “natural.” In reality, it’s just a bad habit. If you need a few seconds to think of a word or conjugate a verb, don’t be tempted to fill the silence with these words and phrases. (And if you’re looking to sound more like a native, consider learning these slang words and expressions instead!)

The francophone version of “uhh…” So versatile, so French sounding… so annoying.

Another way to say “so,” just be careful not to overuse it.

Like “du coup,” this is a perfectly acceptable word to use in the right context, for emphasis meaning “actually,” but it tends to become a tic for some people.

Often combined with another one of these tics, “voilà” is often used to end a thought without really adding any value. Equivalent to: “so… yeah.”

Now, just because the French language can be difficult, frustrating, illogical, deceptive — okay okay, you get the point — that doesn’t mean that it can’t be fun! When you finally get these tongue-twisters down, you’ll feel like you’re on top of the world.

This interjection would translate to something like “fiddlesticks” or “good golly” in English. It’s even tricky for natives – try saying it three times fast!

Check out this amusing blog post by a native English speaker and her adventures with this word, which means “locksmith.” 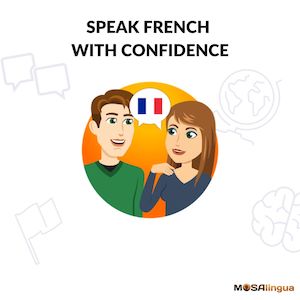 Do you want to improve your spoken French?
Good news: we have a course for that! The Speak French with Confidence MasterClass.

It’s a comprehensive 8-module course designed to help you improve every aspect of your spoken French – fluency, confidence, pronunciation, and more – step by step, and enjoy doing it.