When you’re deciding which foreign language to learn, it can be a good idea to know which are the most used languages on the internet and which languages are the most spoken around the world. Not only will this help you get a sense of how you can use your target language, but it can also be a hint as to whether you’ll be able to find a variety of quality learning resources online. 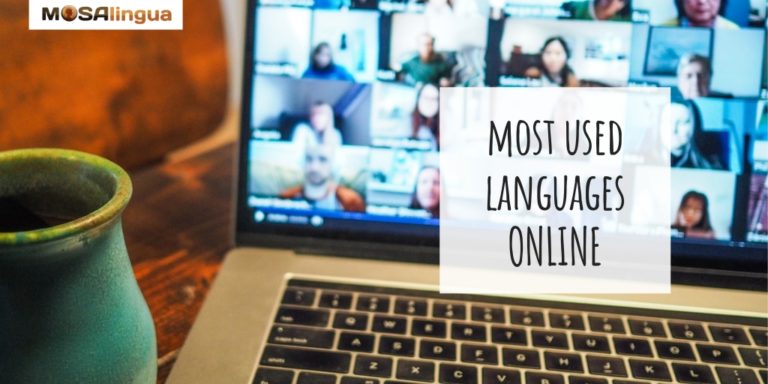 What Are the Most-Used Languages on the Internet?

You might think that the internet is a microcosm that reflects the world at large. But if you take a look at the most used languages on the internet, you’ll see that the demographics don’t quite match up.

There are two ways to measure the use of languages online, and each tells a different story:

Now we’re going to have a closer look to explain each of these metrics, and learn about the most popular web language!

Visualize It: What Languages Are Used Online?

This infographic combines the two metrics detailed below to illustrate the nature of languages online: 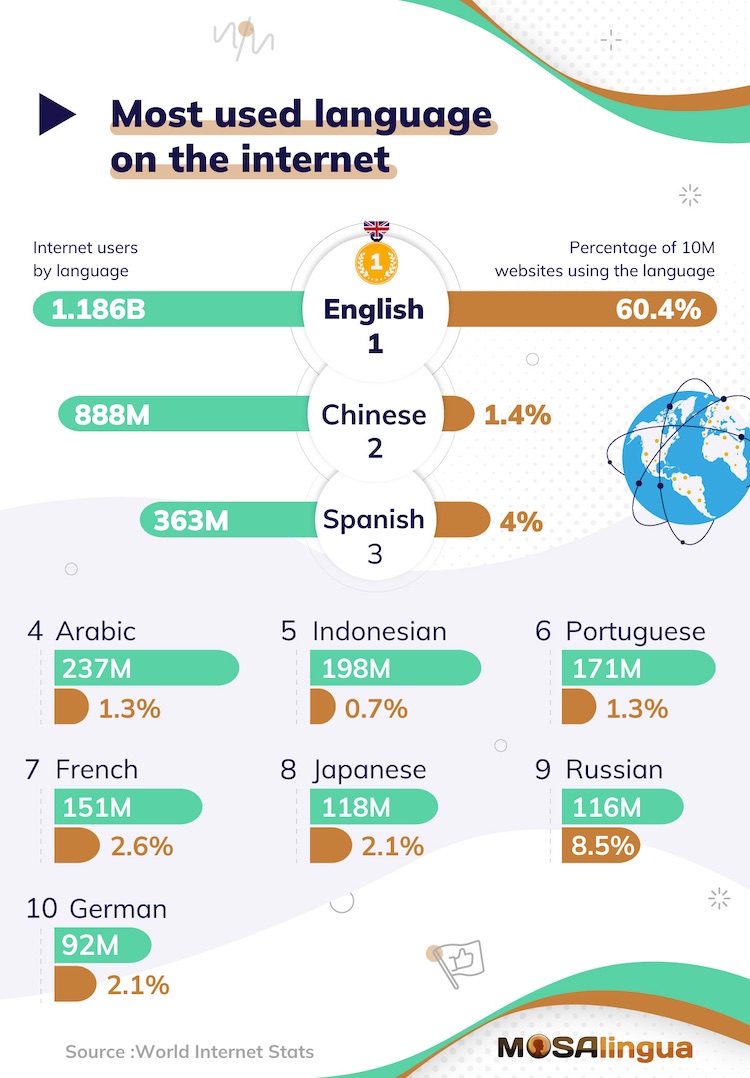 📌 MosaTip: Pin this infographic to your language-learning Pinterest board, or share it with your friends on your favorite social network! Click one of the social media icons at the bottom of this page to share.

If we look at the amount of content available in each language (according to statistics by W3Techs), here are the most used languages of the internet:

English is the leading language on the Internet.

So, exactly what percent of the internet is in English? More than half – about 60% – of all content published online is in English. But if these figures are correct, they’re a bit puzzling.

According to this statistic, Chinese, which is the second most spoken language in the world (and the second most used language on the internet) doesn’t even appear in the top ten content languages.

Instead, second place goes to Russian, due in large part to Runet, the Russian-speaking online community. It’s also worth noting that Russian is not only the native language of Russia, but also many of the countries that made up the former Soviet Union.

However, if we look at the number of speakers of a given language, the top ten languages used online are a much closer representation of the global population:

So, Why Is English the Most Used Internet Language?

Why is English the most used language online? As illustrated above, English is the leading language on the internet. This isn’t terribly surprising, as English has been an international lingua franca for many years. And it’s also the language that was used to create the internet!

You can read more than 60% of the largest web pages in English. To a degree, this is also a measure of access: between 2000 and 2018, individual internet access increased by almost 650% in the UK.

After China, the United States and India are the two countries with the most internet users. They’re also the two largest English-speaking countries in the world. As a result, the majority of information online is presented in English.

Individuals of different nationalities also often use English as a common language. In fact, many people who are not native English speakers still seek out English web pages for convenience.

However, recent trends show that English will not always hold the majority of online content. English is spoken in many countries, but there are only about 360 million native English speakers. In comparison, there are about 950 million native Mandarin speakers and 492 native Spanish speakers. As access continues to grow among Arabic, Hindi, and Chinese speakers, online content will begin to reflect the global population more closely.

As you can see, linguistic tendencies online can give us a lot of information about what’s happening around the world!

And What Are the Other Most Common Languages Used on the Internet?

With more than 1.35 billion speakers, it only makes sense that this language figures so prominently on this list. Indeed, China was the country with the highest number of internet users in 2021. Yet despite the fact that the language is spoken by 14.3% of the global population, only about 1.4% of the 10 million largest sites are in Chinese.

Believe it or not, there are more than 750 million Spanish speakers in the world. A little over half of them are native speakers. And internet connectivity is increasing, too. The percentage of native Spanish speakers with access to the internet is projected to increase steadily in the coming years.

As far as the internet was concerned, Arabic was a “minor” language until fairly recently. In 2015, it didn’t even rank on the listing of the top ten languages used online. But today, it’s one of the top five.

In 2013, only 37% of Arabic speakers had internet access. Today, there are more than 200 million Arabic-speaking internauts (that’s a fancy term for someone who uses the internet!) around the world.

Some languages are more popular than others, but it’s interesting to see how the use of a language online doesn’t always reflect its prevalence on a global scale. For example, Hindi is the third most spoken language by population, but it doesn’t make the list of the 10 most used languages on the internet.

The 10 most used languages on the internet only represent 76.9% of the global population.

However, as more content becomes available online in different languages, more voices and perspectives will be heard. And that’s a positive outlook not only for language learners, but for humanity!