Hey, I’m Abbe, your English teacher here at MosaLingua. I’m American, and today I’m here to help you sound like one, too! I’m going to reveal 7 easy things you can do to reduce your accent and sound more convincing when you speak English. 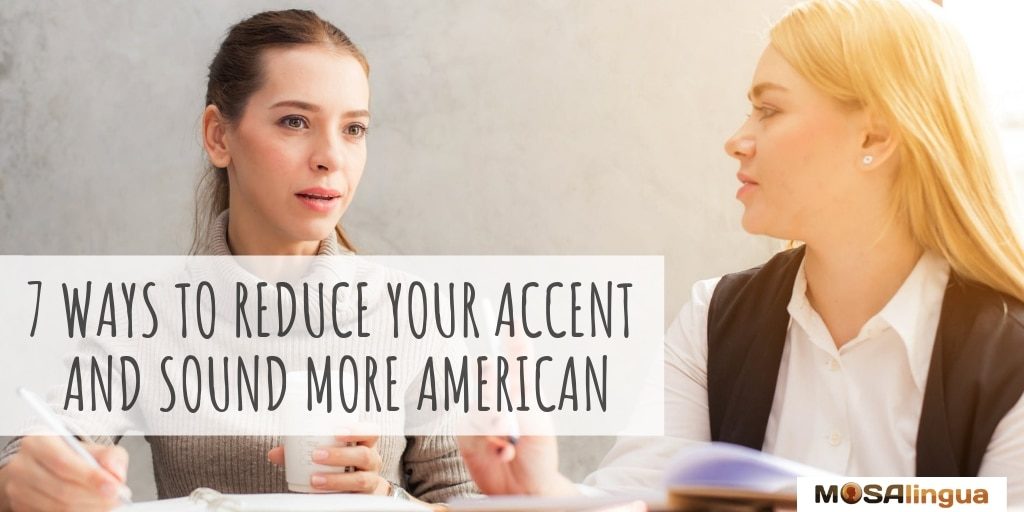 7 Ways to Reduce Your Accent and Sound More American

Want to lose your foreign accent and improve your English pronunciation? Keep reading, or scroll to the end to watch my video!

1. Focus on Your Goal

If you want to develop a great American accent, my first tip is to focus on your goal. Here’s what I mean:

There are many dialects of English, but if you want to sound authentic, you should pick one and stick to it. Your English teachers in school probably did not all have the same accent, so it’s possible that you pronounce some words the British way and some the American way. You may have to relearn some words with a new pronunciation.

Find someone with the accent you’d like to have, for example a TV character in an American show, a famous politician, or a YouTuber (you can even use me, if you want!). That brings us to my next tip…

Once you’ve chosen an accent role model, practice listening to them and try to imitate the way they speak as closely as you can. This is also called shadowing.

Don’t forget to pay attention to their rhythm and intonation (how their voice moves up and down), as these are two things that can drastically reduce your foreign accent. Really get into the character and make it fun. Don’t be afraid to sound American!

If you want more tips on how to practice this fun technique, check out this video I recorded about it:

Shadowing is a good exercise for beginners, because you don’t have to worry about coming up with your own thoughts, building sentences, and pronouncing them correctly. All you need to focus on is the sound and formation of each word and sentence. The speaking exercises you do when you learn a new word or phrase in your MosaLingua app are helpful for memorization, but shadowing provides more opportunity for longer practice and more sound combinations. You don’t even necessarily need to understand the words you’re saying when you’re shadowing, and the first time around, don’t pause the audio to look them up.

You can also check out our MosaLingua Language Lab podcast episode on the shadowing technique here:

Listen to “#1 – American Accent Training: The Shadowing Technique” on Spreaker.

It’s also good for intermediate and advanced learners who might not have spent as much time on speaking and pronunciation at the beginning of their learning as they might have liked. Or, people who need help overcoming shyness and become more confident speakers.

Tips to reduce your accent with shadowing

Here are some things to keep in mind as you shadow your role model:

As you can see, listening is a very important skill if you want to develop a better American accent. There are most likely some English sounds that don’t exist in your native language. When this is the case, we tend to substitute these new sounds with similar sounds in our native language. Unfortunately, this usually leads to a poor accent.

4. Pick a Few Sounds to Master

Most pronunciation issues can be resolved by really mastering just three things. Once you perfect them, you’ll have a noticeably better American accent:

To help you master these sounds, my next tip is to practice in front of a camera. Like I said before, since some sounds are very unfamiliar, you might not even be able to tell that you are pronouncing them incorrectly. So, record yourself with video and audio so that you can compare your mouth and tongue position to a native speaker’s in addition to the sound you make. Don’t be shy – lights, camera, action!

Now I’m going to explain two features of the English language that you should adopt if you want to reduce your accent and sound more American. First, contractions. These are words like “I’m” instead of “I am,” “let’s” instead of “let us,” and “you’ll” instead of “you will.” Not only do they make you appear more comfortable with the language, but they are also are generally easier to pronounce than saying the two separate words back to back.

Want to learn more about contractions? The video below has a few of my best tips about English contractions.

If you prefer, you can also listen to our podcast on using contractions via the MosaLingua Language Lab:

Listen to “#52 – English Contractions: When, How and Why to Use Them” on Spreaker.

Finally, adapt liaisons in your speech. When you first started learning English, it might have seemed as though Americans were always mumbling. That’s because we naturally create gliding liaisons between certain words to smooth out the transition. Want to hear an example of that?

Listen for it in the video below. The video is in English, but you can turn on the subtitles by clicking the gear button at the bottom of the picture.

More Resources to Help You Reduce Your Accent

Don’t stop at these tips if you want to reduce your accent and improve your American pronunciation! We have lots of other articles and resources to help you on your quest.

Sure, it will take a lot of practice if you want to get it right. But once you’ve got it, you’ll sound like a true American! 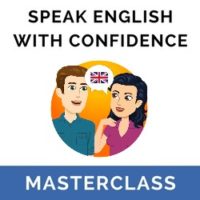 And if you’re really intent on improving your American or English pronunciation, we have a training program for that. Sign up for our Speak English with Confidence MasterClass for tons of tips, in-depth pronunciation lessons, and personalized accent coaching that will have you sounding like a native speaker in just a few weeks’ time.

Ready to reduce your accent? Everything you need to know is right here: Speak English With Confidence MasterClass.

Don’t forget, you can also listen to this article on our podcast, the MosaLingua Language Lab:

Listen to “#28 – 7 Accent Reduction Tips (to Sound Like a REAL American!)” on Spreaker.