It’s no secret, the Russian language is often perceived as hard. Part of this bad reputation comes from its alphabet, which is very different from our modern Latin alphabet. And part of it comes from the fact that it’s not taught in many schools. As a result, very few people outside of Russian-speaking countries even know how to say “hello.” (It’s Приве́т, pronounced privyet, in case you were wondering). However, there are at least ten characteristics of this language that make Russian pretty user-friendly. Wait… is Russian easy to learn? We’re here to convince you that the answer is… it’s easier than you think! 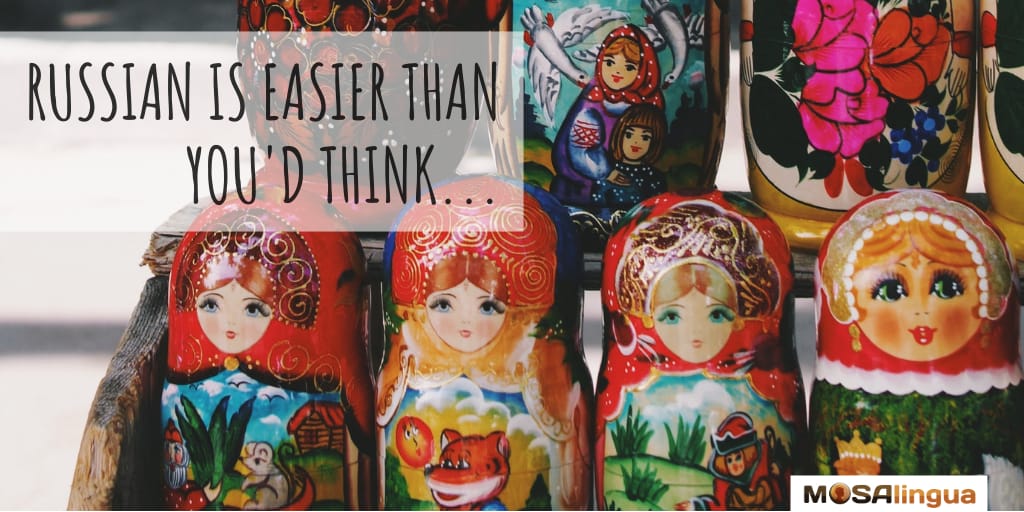 Is Russian Easy to Learn? 10 Reasons Why We Think So

Russian pronunciation is regular and clear-cut. It’s even simpler than English pronunciation! (Shout out to all of our readers who speak English as a foreign language and are learning Russian!) Once you have mastered the basic rules, you don’t have to worry about them anymore.

2. Sure, the alphabet is different… but it’s easy to learn!

As we said, lots of people shy away from Russian because it uses the Cyrillic alphabet. Sure, most letters are different from the Latin alphabet we use in English, but its actual difficulty is really overestimated. Even if the alphabet is different, it’s still… an alphabet. Unlike with Japanese or Chinese, you won’t have to learn hundreds of characters, just a standard set of 33 letters! And when you use the right approach, you can learn to read the Cyrillic alphabet in less than 3 hours. Don’t believe us? That’s a topic for another day, but check back soon for updates!

3. There are no articles

Languages like French, Italian and Spanish use articles that have to agree in gender and number with the nouns they introduce. Good news: in Russian, there are no articles! So no need to struggle to memorize them or to learn how to use them.

4. Word order is not strict

The order of words in Russian sentences is much freer than in English. You can change the position of the words to give them more or less importance. It’s technically an SVO (subject-verb-object) language, like English, but you can shuffle around the words in your sentence to stress different ideas.

5. You only need one word to be polite

To be polite in the Russian language, just add a single word to any sentence. The word is “пожалуйста” (pazhàlusta), which simply means “please.” There’s no need to learn a bunch of polite phrases by heart. If you only learn one Russian word, make it that one!

6. There are only three verb forms

Russian has only three forms: the present, the past and the future. And two aspects: the imperfective and the perfective.

Another interesting characteristic of the language is that there is no verb “to be” in the present. In most languages, it’s one of the most common verbs (plus, it tends to be irregular!). To give you a better understanding, here are some examples:

This particular aspect of the Russian language eliminates a lot of the complexity that language learners often struggle with.

There is only one word you need to be polite, and only one word to express negation. To form a negative verb, noun, or adjective in Russian, stick “не” right before it.

To give you an example:

8. Many words are similar to their English equivalent

Learning Russian easily is possible when you know that many Russian words are similar to their English translation. Check out these super easy Russian words:

So take comfort in knowing that you won’t be starting from scratch! By the way, check out these fun Russian idioms to learn more vocab and find out why Russians “hang noodles on their ears…”

9. Questions are no mystery

In the question: “Ты домой идёшь?” (which means “Are you going home?”) you can emphasize any of these three words to formulate your question, depending on what you want to know about (“you,” “going,” or “home”).

This helps simplify communication. See how easy Russian can be?

10. Russian speakers will be very happy to help you!

The last but not least very important reason why Russian is easier than you think, is that Russian speakers will be very happy to see that you are trying to learn their language. They will be proud to share their language and their culture, and will not hesitate to help you out. So don’t be shy! Talk to them, even if you’re just a beginner.

And if those 10 reasons didn’t quite convince you that Russian is easy to learn (at least easier than some other languages), check out our argument for why it’s worth the trouble: 7 other great reasons why you should learn Russian.

Is Russian Easy to Learn? The ₽1 Million Question… [VIDEO]

Mirari, one of your Spanish teachers at MosaLingua who speaks Russian, explores this question in her latest video. Check it out right here or on YouTube:

Subscribe to our channel for more videos by Mirari and the rest of the MosaLingua team!

(By the way, do you know what currency Russian uses? If you guessed “ruble,” you’re right! The sign for the Russian ruble is ₽.)

MosaLingua now has an app to help you learn Russian! It’s available on iOS and Android smartphones and tablets, and your Mac or PC. MosaLingua Learn Russian is an app you can use to memorize words and phrases in Russian quickly and start communicating with ease! With our app, you’ll learn more about the rich culture surrounding the Russian language. Plus, you’ll have all the tools you need if you ever decide to visit a Russian-speaking country! To learn more, visit the MosaLingua Russian app page or read this article about it.

Filed Under: RussianTagged With: speaking video