You can be almost fluent in English, but if you don’t actively practice improving your accent, you’ll never sound native like! Not to worry though, we’ve put together the four most important tips to sounding like a native English speaker. Practice these four things and you’ll make major strides in improving your accent. 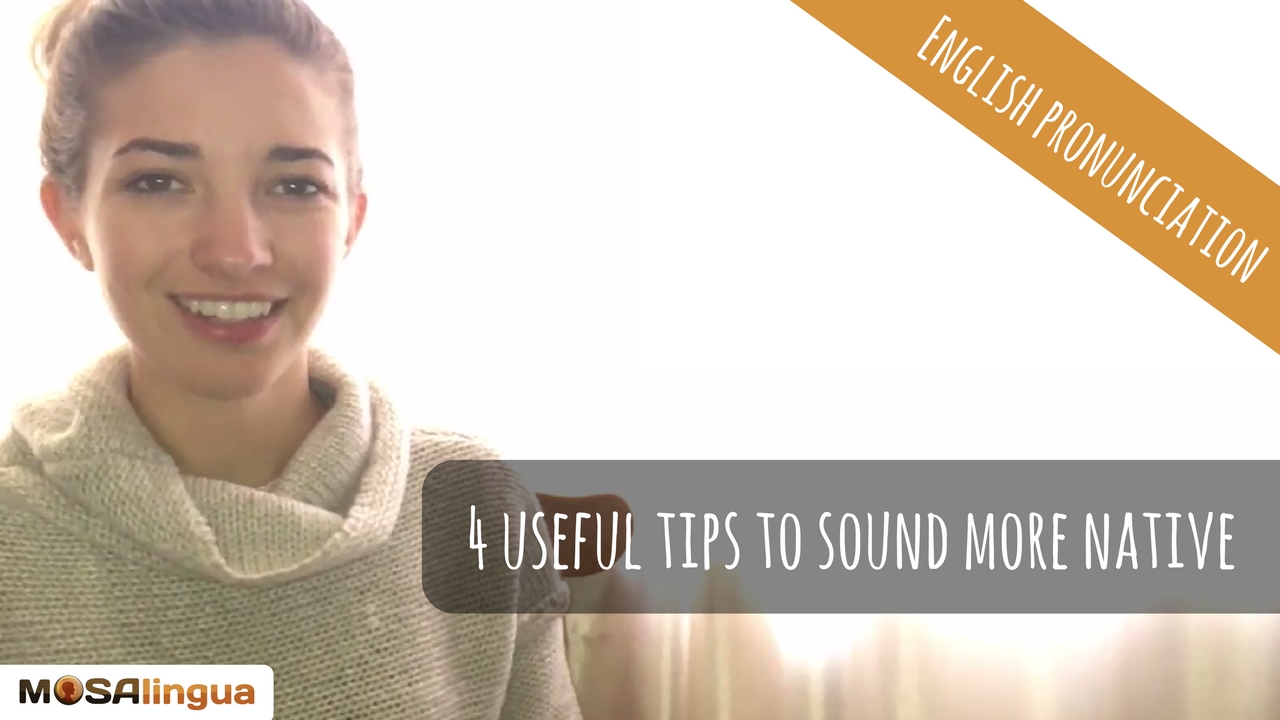 Hi guys, this is Alizah from MosaLingua. Today I’d like to talk to you about American English pronunciation and 4 tremendously useful tips in order to sound more native like when you speak!

To start off with, I’d like to talk about how native English speakers tend to connect the words when they speak. For example they don’t say “not – at – all” they say “not at all” like one unique word. Another example is “Did you go?” It’s not “Did – you – go?” But it’s “Did you go?”. It almost sounds like at the very beginning they’re saying “did-ju” with the “j”.

The second tip I can give you it to work on vowel reduction. When you listen to a native English dialogue, you hear a bunch of words that are reduced when they speak. This is the case of prepositions like “in”, “at” and “for” and conjunctions like “and” an “or”. When these words are spoken, the vowels are taken out because people say them so quickly. I’ll give you a couple of  examples to explain it. Listen to the following sentence, “I’m doing this all for you”.  That doesn’t sound natural, doesn’t it? A native English speakers would say it like “I’m doing this all for you”. Notice: “f’r you”, “f”r you” not “for you”. The vowel is shortened and reduced because I say it so quickly : I’m doing this all for you. It’s the same thing for “and”. Listen to the following sentence: “my father and my brother”. That’s not very natural. Native English speaker would say more like “my father ‘nd my mother”… “my father ‘nd my brother”. See the beginning vowel is reduced completely. “My father   ‘nd my brother “.

Another similar thing is the tendency for native English speakers to squeeze words and use elisions. For  example,  listen to the word “interesting”. Some of the syllables are squeezed. It’s not  “in-te-re-sting”. It’s “interesting”. Do you hear how the second syllable is almost reduced completely? “Interesting”. Another example is the word “comfortable”. You may think it would be “com-for-ta-bel”, but native English speakers say “comf’table”. They take out the “or” completely.

The fourth and last tip I can  give you is about contractions. I’m sure that you’re familiar with some of the more common contractions, for example  “Hi, I’m Alizah” not “Hi, I AM Alizah” or  “I’d like that” not “I WOULD like that”… these are  very common. However, I’d like to take your knowledge of contractions to the next level. When I say the word “him” you can hear the “H”: him. But in a sentence “give him my number”, the “h” is contracted, you cannot even hear it. Another example:”Give her to me”. The h is contracted. When I say “her”, you can hear the “H” but in “give her to me”. There the H is squeezed. So learn to recognize these contractions and even force yourself to use them: this will allow you to sound much more native like than you would otherwise.

Now it’s your turn can use these tips improve your English pronunciation. Before you leave, make sure to subscribe to our YouTube channel to watch more videos on English Pronunciation. Thanks for watching guys, take care!