In language learning, people often wonder when to start speaking a language (the language they are learning of course). This is an important question… But it’s actually quite hard to answer. Even language experts can’t agree about the “right time” to start speaking. So is it better to start talking from the beginning or wait until you are really ready? Let’s have a look at the different options, and the team’s opinion here at MosaLingua. 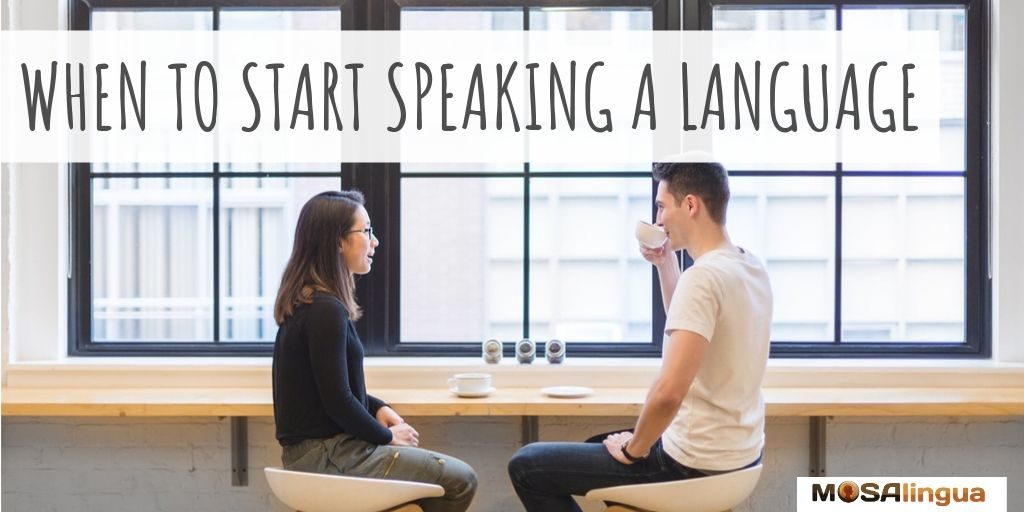 Option 1: Start to Speak as Soon as Possible

Many specialists in languages and other polyglots have shared their point of view on this subject. Let me start with the first option they suggest: start speaking a language from the beginning, as soon as possible.

Our friend Benny Lewis, the well-known Irish polyglot behind the blog Fluent in 3 Months, is one of several notable specialists who stand behind this idea. Benny’s advice is to start speaking a language from day one, because learning a language is done through practice. In order to make progress, you need to practice as early on as possible. The advantage of this method is that you practice right away without focusing too much on the theory. You learn by doing, instead of sticking your nose into a book. And you avoid developing a fear of speaking.

On the other hand, there are some disadvantages. Starting to speak a language too early can be a challenge when you are short on vocabulary and other basic language skills. This method is probably not suitable if you are shy, introverted or a little bit of a perfectionist. And your first experience can also be daunting if you come across someone who isn’t friendly or is impatient with you.

Option 2: Wait Until You Are Ready

The opposite opinion advises that you wait until you are (or feel) ready to talk. The idea is to delay speaking practice, and to dedicate the first steps of your learning to building up enough vocabulary and improving your other language skills, especially listening. This is the method defended by the famous polyglot and linguist, Steve Kaufmann who says, “What’s the rush?” Steve prefers to spend time listening and reading, and to start speaking a language only when he can fully understand what other people are saying, and give an answer that makes sense. Of course, that’s his personal choice.

The Canadian linguist admits that different learners can have different methods, and some might start talking earlier. There are quite a few advantages of this approach:

However, this approach also has its disadvantages. First of all, you might end up waiting too long before starting to speak a language and developing a fear of speaking. Waiting too long can also mean that you lose motivation to speak, and your language skills start to falter. Second of all, and more importantly for your learning, this method means that you don’t practice what you learn right away.

Option 3: It All Depends on You, and the Language!

Between these two extremes, of course, there are more nuanced points of view. Like that of another polyglot and language specialist, Luca Lampariello.

Our friend Luca is on the fence about this debate. He basically says that there isn’t ONE right answer to this question. In his eyes, choosing the right time to start speaking a language depends both on subjective factors and on objective factors. An objective factor is, for example, the gap between your target language and your mother tongue. Subjective factors may include your state of mind, your personality and your language experience.

Option 4: MosaLingua Co-Founder Luca’s Opinion About When to Start Speaking a Language

Luca’s thoughts on the problem lie somewhere between the opinions of Benny Lewis and Luca Lampariello. When someone asks him when you should start speaking a language, he usually answers: “As early as possible! But it depends on you and your specific situation.” Let me explain both parts of this answer.

Having learned several languages, Luca was able to experiment with both strategies. Postponing speaking practice until much later was counterproductive in his case. So he always tries to speak as soon as he can. If the target language is close enough to the native language:

For many of us, focusing too much on theory is like trying to learn to play tennis by reading a textbook, without stepping on a tennis court. It’s impossible! The more you force yourself out of your comfort zone, the faster you make progress. On the other hand, there’s no use in forcing anyone to talk too early if they don’t feel ready.

Which brings us to the second part of his answer, where he recommends different strategies for different learners:

All these tips and opinions are summarized in Luca’s handy video below. This video is also available on our YouTube page. It has been recorded in English, but is available with subtitles in English or 5 other languages.

I really hope this video has allowed you to think about when is the right time for you to start speaking a language. Remember that there is no right or wrong answer… But there will come a time, sooner or later, when you will have to do it. Speaking a language is a skill that you build through practice, so you will only learn and improve through doing it. To get yourself started, don’t miss these other articles on the subject: