Welcome to another article and video in our series of English expressions that will impress the native speakers you talk to! Today we’re talking about the word: “What?” Anyone who has tried to learn a foreign language knows that there are times when you just don’t understand. And in English, the expression most learners know to express this is: “What?” Today we’re going to explain why it’s an expression you should stop saying. Plus, we’ll give you lots of other expressions to use instead to improve your English vocabulary. 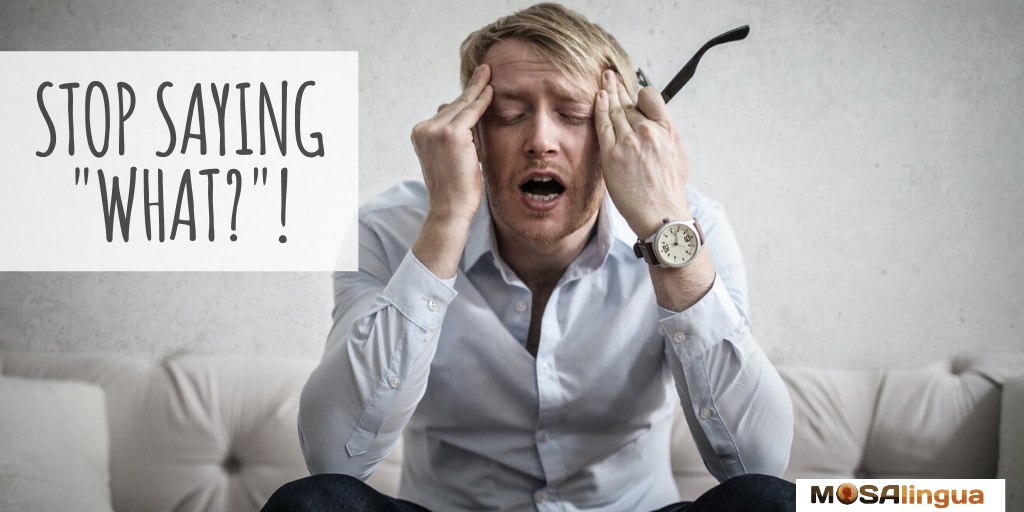 Expressions that Are Better than Saying What in English

So you’re learning English. Maybe you’ve even started talking to native speakers. That’s great! Now, it’s time to expand your vocabulary. Keep reading to learn ways to replace “what” in your vocabulary.

If you want to impress the people you talk to, there are some more “sophisticated” things to say when you really mean, “What?” For example, you could say:

They’re short and very easy to remember. Just be sure to change your intonation (make your voice go up at the end) to turn them into questions. Simply saying “pardon” or “come again” in the middle of a conversation won’t make sense.

Something else you can say when you don’t hear someone well or can’t understand them is:

Americans are known for apologizing a lot, but this is nice, neutral way to tell someone that you don’t understand. Plus, it’s always better to be too polite than not polite enough!

Here are two more polite ways to say “What?”:

I beg your pardon?

Just be careful with these two. If you say them with the wrong tone of voice, people might think they have offended you or made you mad. Be sure to smile when you say them. 🙂

Here are two very casual, somewhat impolite ways to say “what?” You should only use among friends or family:

(Watch the video below to hear the difference in how they’re pronounced.)

Instead of saying “Could you repeat that please?“…

As an English learner, you are probably already very familiar with the phrase: “Could you repeat that?” But there are more idiomatic ways to say the same thing, implying that you would like the speaker to repeat themselves:

I didn’t catch that

Sometimes you’ll understand the words, but not their collective meaning. For example if someone uses an idiomatic expression, tells a joke, or makes a cultural reference that you don’t understand. Two appropriate expressions to help you out of this situation are:

I don’t get it

Is It Wrong to Say What in English?

Now that you know lots of alternative ways to say “What?” in English, you might be wondering what the problem with “What?” is. After all, it’s direct, and it gets the message across that you did not understand. Before I tell you, I want to be clear: saying “What?” is better than not saying anything at all. Sometimes, you might feel like you’re inconveniencing the person you’re speaking to by admitting that you didn’t understand and asking them to repeat themselves. But don’t be shy! If you just smile and pretend like you understood, you might run into trouble later on in the conversation. Plus, you’ll miss out on a learning opportunity. So it’s best to be honest, and if “What?” is the only expression you know, it’s okay to say it.

However, “What?” is very blunt. It’s not the most polite. And depending on who you are talking to, it could be taken the wrong way. It’s important to adapt to the context of the conversation you’re in. If you’re just chatting casually with an English conversation partner, it’s totally fine to say. But if you’re at a job interview for a big company, and are wearing a suit and tie for example, avoid it.

If you forget all of those expressions you just learned, your body language – a quizzical look or a tilt of your head – can help you in a pinch. But, to make sure you do remember these during your next conversation, add a few of them to your MosaLingua learning stack and memorize them with our Spaced Repetition System.

Abbe’s Tips – How to Pronounce These Expressions in English

By the way, this is part 2 of our Express to Impress series, where we introduce new English expressions that can make your vocabulary more precise and engaging. If you haven’t already seen part 1, our video about how you need to stop saying “hello” and “goodbye,” watch that one next!

For now, though, scroll down or head over to our YouTube channel to watch our English teacher, Abbe, explain all of the expressions you learned in this article. It’s in English, but there are subtitles in 6 different languages (French, Spanish, Italian, German, Portuguese, and English). Feel free to click the gear icon to slow the video down, too. Enjoy!

Subscribe to our YouTube channel so you’re the first to know when the next video in the series comes out, or when we publish other videos about language learning.

What expressions will you try out next time you don’t understand somebody in English? Let us know in the comments below!