One look at written Russian is enough to make some people turn back on their journey to learn the Russian language. The Russian alphabet is based on Cyrillic script. Some of the consonants and vowels in the 33-letter Russian alphabet look like letters in the Latin alphabet that English uses. Others… do not. But with the right methods, advice, and techniques, learning the Russian alphabet and how to pronounce it doesn’t have to be difficult. You can learn all of the Russian sounds you need in just a few hours. 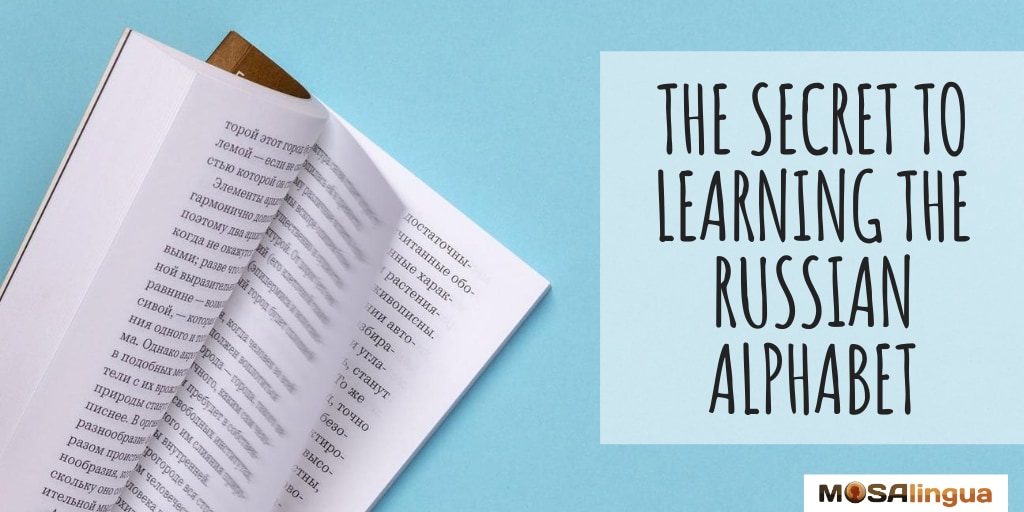 There are some common misconceptions about the Russian alphabet. First, it is in fact an alphabet, as opposed to a large set of characters with individuals meanings, like in traditional Chinese. Each consonant and vowel has a unique sound, which makes it even easier to learn than English (consider the two c‘s in circus, or gh in though, rough and bough). (Actually, there are two special cases in which a consonant’s sound may change that we’ll introduce towards the end, but even then there is an easy rule to follow.)

There are 33 letters in Russian alphabet, just a few more than the 26 in English. And before you ask, yes, of course Russians sing their ABCs! This video from the Russian version of Sesame Street is helpful for learners because the kids show blocks with the Russian alphabet written on them as they sing each letter.

The Russian alphabet chart below gives you an overview of the Russian characters, how to say the Russian letter names, the rough sound equivalent for each letter in the Russian alphabet in English, and the International Phonetic Alphabet (IPA) transcription of the sound each letter makes. (Read this article to learn more about the IPA.) You’ll also learn how to write each character, although Russians often use cursive when writing by hand, which looks a bit different. To type Russian letters, you’ll need to change the language of your keyboard.

Breaking Down the Russian Alphabet

Instead of trying to memorize the Russian alphabet in order, as it’s listed in the alphabet chart, go about it the smart way. We’ve broken down the Cyrillic alphabet into different categories to help you learn them more easily. Start with the Russian letters you already know, and go from there. We list the uppercase letter first, followed by the Russian lowercase letter in parentheses.

Vowels and consonants with identical shapes and sounds in English

The good news is that some vowels and consonants are identical to those in the Latin alphabet, both in form and pronunciation. Learn these first, since they are the easiest to remember. That’s why we also sometimes call them “true friends.” Use this mnemonic device to remember them: AKEMOT.

Next, a few Russian letters look like letters in our alphabet (in writing) but you pronounce them differently. However, they sound like other English letters. These are what we call “false friends,” since they look like they should be one thing, but sound like something else. But don’t worry, there are only 5 of them, and you’ll get the hang of them pretty quickly. All it takes is a little practice to memorize them since you already know the sounds from English.

We pronounce these letters similarly, but they aren’t exactly the same. English and Russian are two pretty different languages, so you will still need to practice your pronunciation to pick up a Russian accent.

The remaining letters of the Cyrillic Russian alphabet

The rest of the Russian letters will take a little more work and imagination. While many of the sounds exist in English, the form of each letter (how we write them) differs from the Latin alphabet. However, Cyrillic is nearly a one-to-one alphabet when it comes to phonetics, meaning that, unlike English and many other languages, each letter has only one sound.

Here are the remaining consonants of the Russian alphabet. You can pair up each letter with a consonant in the English alphabet. They look different, but the sounds will be familiar.

Below, you’ll find consonants whose sound or pronunciation exists in English, but only by combining letters.

Finally, you have the vowels. They, too, have familiar English sounds. It’s not particularly complicated, however, you need to spend a little time memorizing them.

(Two things to watch out for here: First, be careful not to confuse З (above) and Э. Second: Э and E are different Russian characters, but sound very similar in most words. At the beginning of a word, E alone will sound like the ye in the English word yes; in the middle, it “softens” the preceding consonant. But if that all sounds too complicated, don’t worry! Just focus on practicing your pronunciation, and you’ll come to learn the difference without giving it too much thought or effort).

Other letters to know

There are two additional Russian letter symbols that are good to know, but which you don’t need to worry about too much in the beginning. They act as a pronunciation aid, more than as indispensable letters per se. They’ll help you read and pronounce words in Russian more accurately.

They have no sound or pronunciation themselves, they just modify the letter before them. As we mentioned in the introduction, this is the only case in which a consonant is pronounced differently in Russian.

There is one accent in written Russian, which appears over vowels and signals that a vowel or syllable should be stressed: the acute accent (´).

You’ll need to learn it eventually if you want to better understand spoken Russian and make yourself understood. Listening to spoken Russian (in movies or TV series, audiobooks, podcasts, etc) and practicing speaking frequently will help you succeed in learning the proper pronunciation.

How to Learn the Russian Alphabet 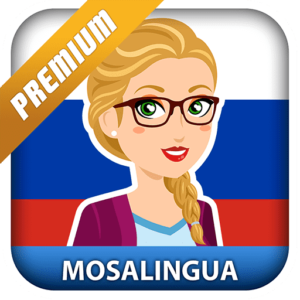 Your first priority should be to learn how to read Russian letters, and what sounds they represent. Using the Spaced Repetition System in our Learn Russian app is a good way to memorize them. Our Premium app features a full set of lessons about the Cyrillic alphabet and how to pronounce it. Once you get a little more comfortable with the individual letters, move on to full Russian words. This is a straightforward but powerful way to learn the Russian alphabet (any alphabet, for that matter!).

By the way, you can also write the Russian alphabet with English letters. That’s called transcription. Every MosaLingua flashcard includes the word written in the Cyrillic alphabet, and also a transcription in Latin characters you are familiar with that will help you read it more easily. However, we really recommend using the audio recording to learn how Russian words are pronounced instead of relying on the transcription.

In this video, polyglot and MosaLingua Spanish teacher Mirari lays out everything you need to know to learn the Russian alphabet, fast. Watch it right here or on our YouTube channel. The video is in English, but there are subtitles if you need them. Just click the Settings icon ⚙️ in the bottom right corner of the video.

Start practicing with these examples

Here are some words in Russian that you can start using now to begin practicing:

Eager to learn more? You’ll find plenty more words, useful phrases and idioms in our Russian MosaLingua app. Finally, be sure to check out our favorite resources for learning Russian for extra practice.