Today we’re going to elaborate on a past article in which we gave some pointers on choosing a travel destination to improve your language skills. Below, you will find a list of where you should travel to learn languages. For each language, we will focus on one country and highlight some of the reasons you may contemplate choosing that destination or language. 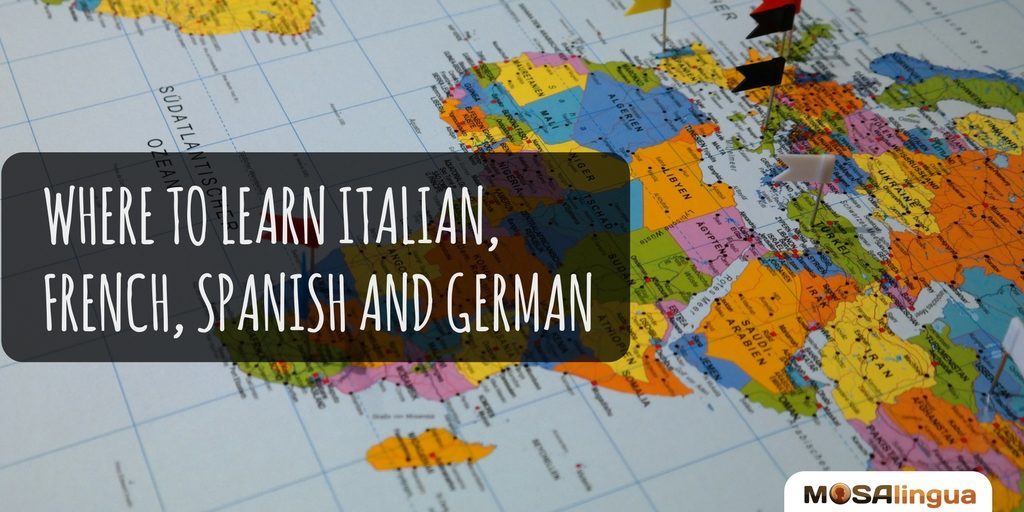 The birthplace of the Spanish language is home to some of the most unique architecture in Europe. With its numerous mosques, cathedrals and the skylines of its bustling metropolises, Spain is the traveling architect’s dream. Furthermore, while foreigners may see Spain as a single country, it has several autonomous communities, each with their own culture, traditions and unique architecture. If you’re studying tourism, travel or hospitality services, you should set your sights on Spain. Not only does it have the world’s second biggest tourism industry, its natural beauty is some of the best in Europe, with mountains, plateaus, coastlines and various islands.

Spanish, like most other languages on this list, comes from Latin. So if you already know Portuguese, Italian or French, you are a step ahead of the game in learning Spanish. Unlike English, Spanish spelling is phonetic, and learning it is a cinch!

Italy will offer you a plethora of exquisite cuisine, beautiful cities and famous artwork. According to UNESCO, around 60% of the world’s masterpieces are currently in Italy. You will find an amicable culture that is very welcoming to foreigners. If you are interested in expanding your experience in the fashion, graphic design and gastronomic industries, Italy should rank high on your list of travel destinations to learn a language. It has the fourth-largest economy in Europe and the eighth in the world. On the other hand, their educational institutes are renowned for art history, music and linguistics. In all, Italy is a hotspot for those looking to work or gain experience in the humanities.

Italian is an Indo-European language and is very close to French and Spanish. So if you already know these languages, you have a head start on Italian. Furthermore, it has a simple phonetic and spelling system. You will have an easy time learning how to read and pronounce it, since nearly every letter has one sound and there are only five vowel sounds and four double constants.

If you want to travel to Brazil, you will surely be surprised. You can fully immerse yourself in the Portuguese language and the Brazilian culture. In addition to their tropical climate and beautiful beaches, the vibrant society is another draw. If you specialize or invest in emerging markets, Brazil poses a place for growth. Along with Russia, India and China, Brazil is one of the BRIC countries. Brazil is also abundant with natural resources; mining and oil are booming industries there.

Academia in Brazil is focused on health sciences, engineering, urban planning as well as social studies. Institutes like the University of Sao Paulo and the University of Brazil are some of the highest-ranking universities in the region.  In all, if your studies or your profession are focused on emerging markets and developing countries, Brazil should rank high on your list as well.

The Portuguese language is in the same family as Italian and Spanish. Portuguese and Spanish are very close, in both grammar and vocabulary.

Don’t be dismayed by the saying “life is shorter when you know German”, since it’s the number one most spoken language in Europe. German is the official language of Germany, Luxembourg, Austria, Lichtenstein, and it has shared official status in Switzerland and Belgium. Germany is considered the economic motor of Europe, so this leaves you with tons of employment opportunities. However, you will eventually need to master the language — especially since they are leaders in the technological, financial, industrial and automotive markets.

Germany’s universities are known worldwide for the quality of their research. For this reason, their institutions draw in researchers from all over the world, especially for postgraduate studies. While Italian universities are more known for their humanity studies, German universities focus on the hard sciences and technology. Still, universities such as Macromedia University of Applied Sciences have renowned communications and journalism programs.

German is the only language on our list which is in the same family as English, the Germanic languages. As you study German, you will notice similar words and grammatical structures in both languages. However, learning German is still no easy task. It has certain features English doesn’t have, such as grammatical case and gender. In the end, learning the language of the powerhouse of Europe is worth the trouble.

Last but certainly not least, French is the second most taught language other than English with 200 million speakers worldwide. The Francophone makes up 68 countries. So while we listed France as the best country to learn the language, you have plenty of travel destinations to consider. If your profession is in fashion, art, dance, architecture, visual or culinary arts, French will open up many doors for you. And the best part is you aren’t restricted to just France — Canada, Switzerland, Belgium and various African countries are home to large French-speaking companies. French is invaluable within the disciplines of international relations and political science since French is an official language of the UN, NATO, the EU and UNESCO.

Learning French is also an opportunity to immerse yourself in the French culture, cuisine and philosophy, and as a result, you will see the world through the eyes of a francophone! While French is a Romance Language like Italian and Spanish, it’s also the language of love! Learning it will allow you to play with the sounds and melodies which give it its reputation.

Learning French will be easier if you understand other Romance languages, particularly Portuguese and Italian. Knowing English also gives you an advantage, since some 30% of English words come from French.