Bad pronunciation is a bad habit like any other. Some of us bite our nails, others smoke cigarettes. You probably don’t even remember the first time you did it, but now stopping seems impossible. Today we’re talking about how to break those bad pronunciation habits and save your speaking skills! Read on to find out just how to free yourself from the bad habits that are bringing you down, and even replace them with good ones. 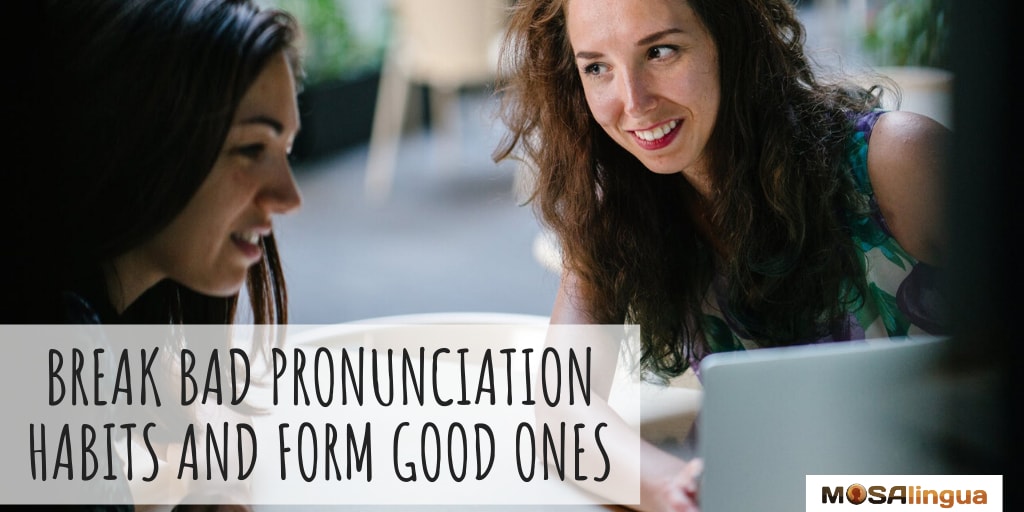 If you’d like to listen to this article, head over to the MosaLingua Language Lab podcast:

Listen to “#42 – How to Break Bad Pronunciation Habits” on Spreaker.

Why don’t you start working on forming a good habit right now, and subscribe to our channel? We publish new videos every week. So, if you subscribe and hit the little bell to turn on your notifications, you’ll be reminded to work on your listening skills on a regular basis. 😉

Forming bad habits is easy. Unfortunately, breaking them is hard. If you’re an athlete, you understand. It takes weeks of hard work to get in good shape, but if you slack off for just a few days, you’ll end up nearly back to where you started. It’s the same with pronunciation! Replacing a bad habit with a good one is challenging, but not impossible.

To make the learning process as enjoyable as possible, you should really try to learn the correct pronunciation the first time around. Abbe talked about why having good pronunciation is such an asset for language learners in another video on our channel. And in just a minute, we’ll tell you exactly how you can adopt proper pronunciation from the very beginning. But first let’s explore why people form bad pronunciation habits in the first place. Here are the most common reasons:

Why do we develop bad pronunciation habits?

We often don’t realize that we’re developing bad pronunciation habits. Obviously, if we did, we wouldn’t develop them in the first place!

How Can I Make Sure to Learn the Right Pronunciation the First Time Around?

To avoid the need to break bad habits, it’s best to form good ones from the very beginning of your language learning journey. To do so, make sure your practice is balanced. Reading and writing are important skills to learn, but don’t neglect speaking and listening.

For speaking practice, it’s best to do it with a native speaker. When you practice with an “expert” at the language you’re learning, they can point out your pronunciation mistakes right when they happen. That way, you can nip them in the bud before they become ingrained bad habits.

So now you know why bad pronunciation habits form, and how to build good ones from the get-go. BUT, once you’ve developed a bad habit, there are ways to break it! Don’t despair!

How Can I Break the Bad Pronunciation Habits I’ve Developed?

According to many studies, building or replacing a habit takes between 21 and 30 days. You should make the effort to deliberately change your pronunciation habit for about a month.

At the beginning it will be a bit painful because you’ll have to think a lot before you speak, “Okay, now I’m about to say a word with the /th/ sound so I need to put my tongue in the right position to pronounce it correctly.” But eventually, you’ll end up on accent auto-pilot.

Here are some effective ways to correct your pronunciation in any language:

1. Get a native-speaking conversation partner

This is our most important tip. We already told you why they’re so useful. So go find one!

2. Don’t be scared of tricky sounds

Once you have a language exchange set up and know where your pronunciation weaknesses lie, work those tough sounds into conversation as often as possible. You’ll have a tendency to shy away from them because they’re hard for you, but that’s exactly the opposite of what you should do if you want to break your bad habits. The more you practice and get corrected, the faster you’ll replace your bad habits with good ones.

Bad habits are already hard enough to break on their own, so when you try to break a ton at once, it’s even harder. Focus on one or two of your worst mistakes and really give it your all. Once you’ve corrected those, which is already a major improvement, move on to the more subtle errors. I made it my priority to work on the “u” and “ou” sounds when I was learning French… because it meant the difference between “beaucoup” and “beau cul”!

4. Train your ear and your mouth

You might not even realize that you’ve formed a bad pronunciation habit. Sometimes, you’ll need to train your ear to recognize the difference between the sound you’re saying and the correct sound. The International Phonetic Alphabet, or IPA, can be a helpful tool. The MosaLingua Speak English with Confidence MasterClass is also a great resource for English learners. It has special lessons about all of the trickiest sounds.

You may need to exaggerate the new sounds you learn as you work on replacing your bad habits. When I was working on my rolled R in Spanish, I sounded like a motorcycle engine! As silly as I sometimes felt, it really helped me get my mouth used to making that sound. And now I’ve toned it down a lot and sound *almost* like a normal person when I pronounce it.

Record yourself saying words with your target sounds periodically so that you can measure your progress. It’s encouraging to see – or hear – how far you’ve come!

So, now it’s up to you to identify your own bad pronunciation habits and get to work breaking them! Luckily, now you have all the tools you need to do so. Good luck!

Abbe reiterates all of these tips in her video about what to do if you’ve developed bad pronunciation habits.

You can watch it on YouTube or just scroll down. It’s in English, but feel free to turn on the subtitles in one of the six languages we offer. Click the gear button at the bottom of the video to activate them. You can also slow it down – we recommend 0.75x.

If you found this article interesting, we think you might also enjoy one of our other podcasts on pronunciation:

Listen to “#57 – How Much Time Should You Really Be Spending on Pronunciation?” on Spreaker.