If you are learning Spanish then it may be interesting, or even useful, to know how to recognize different Spanish accents. There are a lot of them! In fact, Spanish is the second most widely spoken language on the planet after Mandarin Chinese. So with over 400 million native speakers, it’s no surprise that there are dozens of accents.

So how can you learn to recognize different Spanish accents? 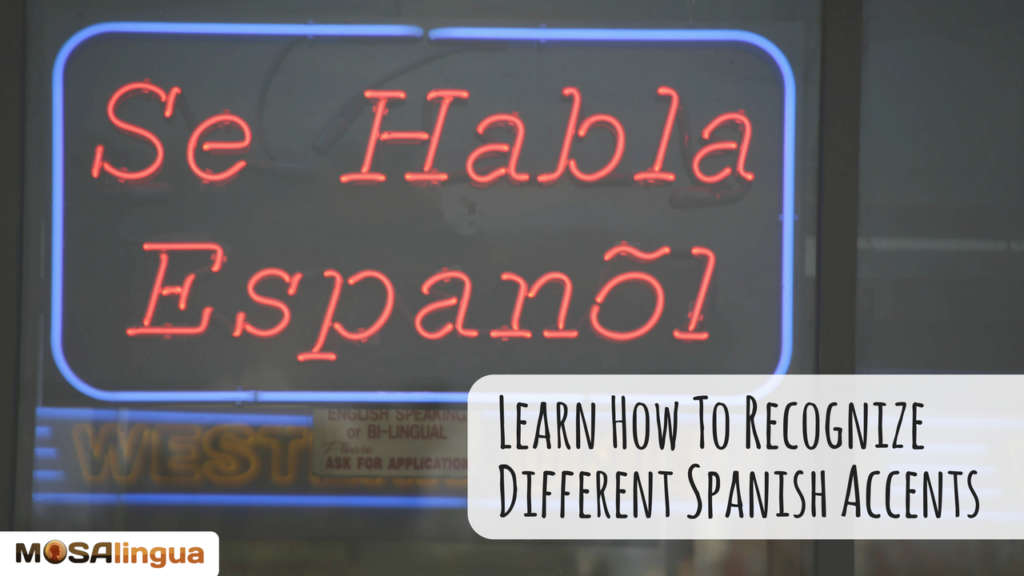 In order to learn how to recognize different Spanish accents you need to listen for the particular pronunciation, intonation and articulation of words and phrases. Although written Spanish is all the same, the way it is spoken can be quite varied. Even within one country, you can hear several different accents.

So, the best way to recognize different Spanish accents is to learn what to listen for and then compare. A great way to do this is to watch movies and TV series from Spanish-speaking countries.

To start you off on learning how to identify different Spanish accents, below is a brief explanation of what to listen for in order to recognize 5 common Spanish accents:

Castilian is the language of Madrid and northern Spain and is quite easily identified. Its most obvious characteristic is the pronunciation of ‘ci’ and ‘ce’ as ‘th’. For example, ‘gracias’ (thank you) sounds like grath-ee-as instead of the gras-ee-as you would hear in other Spanish-speaking countries. While it may sound like a lisp, it isn’t and it will make it easy tell if the speaker is from Spain.

Mexican Spanish is another distinct accent that has unique characteristics. Aside from the very particular slang that is used throughout Mexico, you should listen for the intonation of the last word of each sentence. The tone rises and is slightly drawn out towards the end of sentences and is slightly nasal.

Due to its heavy Italian influence, the Argentinian accent is quite singular. It has a sing-song quality to it and they pronounce ‘ll’ as ‘sh’ instead of the ‘y’ sound you usually hear (same goes for Uruguay). In addition to this, Argentinians use ‘vos’ instead of ‘tú’ as in most other Spanish-speaking countries. It is also used with a verb form that is similar to ‘thou’ or thee’ in English.

When you travel to the Dominican Republic, the coast of Colombia or Venezuela, or any other Spanish-speaking coastal area, be prepared to focus on your listening. These areas tend to speak Spanish very quickly! One of the other biggest tip-offs that you are listening to Caribbean or coastal Spanish, is the dropping of the ‘s’ at the end of words. It’s considered rather informal or laid back although the speed is faster that normal! So, why drop the ‘s’? Well, dropping the ‘s’ lets you speak faster, of course.

The Spanish spoken in Colombia is often considered to be one of the most pure or neutral, particularly that of Bogotá which is clear and spoken rather slowly. That being said, Colombia is a very diverse country and there are multiple accents throughout its different regions. The most notable accent is from Medellin and its surrounding areas. Oddly enough, the people from this area also use ‘vos’ instead of ‘tu’ and the corresponding verb form just like in Argentina. The accent has a more musical quality to it and many people find it very pleasant to listen to.

At the end of the day, there are probably too many accents to really learn them all but it is a fascinating endeavor. Of course, describing an accent with words cannot compare to actually listening to it. As mentioned above, a great exercise is to watch movies and TV series. We also recommend checking out YouTube videos so you can see and hear these accents for yourself.

Below is a humorous rendition of a few classic Spanish accents by Venezuelan comedian Joanna Hausmann. It’s all in good fun and as always, learning is more enjoyable when it’s funny.

Hopefully this has given you some insight into what sets different Spanish accents apart and how to learn to recognize them. We’d love to find out your thoughts on what some of these different accents sound like to you. Which ones are the most difficult to understand and why?