Check out this interview between MosaLingua’s co-founder Luca Sadurny and German blogger and YouTuber, Gabriel Gelman, which took place at the Polyglot Gathering! The focus of which is whether or not it’s possible to learn two languages at once? Find out if it’s a good idea now! 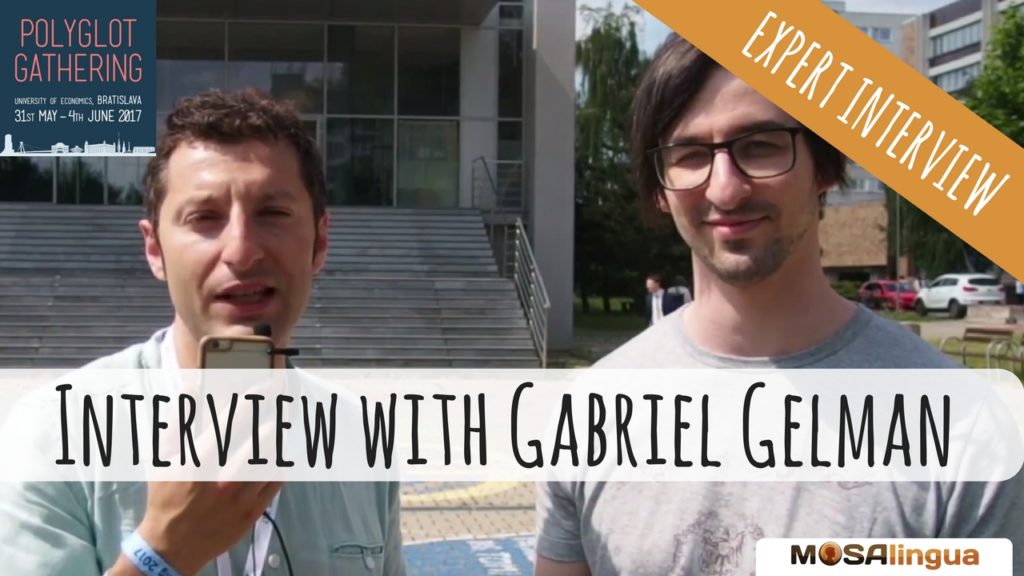 Luca: Hi, I’m Luca from MosaLingua. Today I’m with Gabriel Gelman from the blog “sprachheld,” and we are at a conference for polyglots, the Polyglot Gathering, in Bratislava. We’re talking about how to learn two similar languages at the same time and not mix them up. So, welcome Gabriel!

Gabriel: Thank you so much, Luca.

Luca: Thank you. So, Gabriel, you learned two languages that are fairly similar, French and Spanish.  I wanted to hear a bit about your experience: how did it go for you? For example, how did you keep from getting them confused? I started with French. I went to France to learn French with Erasmus. I was in Toulouse, and the problem was that most other Erasmus students studying there were from Spain.  So I was in France, and I wanted to learn French, but all of my friends were Spanish.

Gabriel: So I also wanted to learn Spanish.  It wasn’t a great idea, because I didn’t speak French very well yet, and I was learning Spanish at the same time, so I mixed up the two sometimes. But I didn’t really have a choice, so…  When I have the choice, it’s better to learn one language really well,  because to communicate, I need to be able to speak it well. Not perfectly, but at least be able to communicate without problems. And then start learning another language if they’re similar.  So actually, the idea is,  I pretty much agree with this, you should reach a proficient level in one of the two languages, and then start learning the other. I’ve met people who have told me, “Alright, I’m going to learn  (this is mostly Francophones who have told me this) I’m going to learn Italian and Spanish at the same time, because they’re similar languages.“ So if I’m understanding you correctly, Gabriel, you’re saying this isn’t a good idea?

Luca: No, not at all. Actually, I got an email about a week ago from someone who wanted to learn Italian, French, and Spanish at the same time. So he wanted to make flashcards, and write in German on one side and in French, Italian, and Spanish on the other side. And I said, “That’s not going to work. That’s impossible. You’re going to get them confused all the time.”

Gabriel: No kidding. If you start learning one language,  you don’t know all of the words in that language well yet, and then if you start learning another language that you also don’t know well, you’re going to mix them up. It’s the same thing for me with my Hebrew, which is even worse than my French, so if I start learning more Hebrew, it’s going to be hard. But speaking a language that is similar is impossible. You’re always going to confuse them. Because if you just learn French words, and then if you speak it all the time, you’re going to remember those words.

Gabriel: Yes, it’s very easy. For me, it was really hard to learn French but then learning Spanish was easy because the two languages are quite similar. I also want to learn Portuguese. I don’t know when, but I know that it’s going to be easy for me since I already know Spanish and French, and there are many similar words, the grammar is the same, all you have to do is change up some of the roots and that’s it. If someone wants to learn a language quickly, if you learn a similar language to one you already know, you’ll pick it up really quickly.

Luca: And to build on that: what do you think about trying to learn two languages at the same time if the two languages they pick are very different, like, say, German and Spanish for example?

Gabriel: I do not think it’s a good idea. I know a lot of people do it. But you’ll make better use of your time if you focus on one language. Because learning a language isn’t something you can just do for 5 minutes a day. You need to do it every day, you need to speak… And for example, Lydia Machova spoke about that today during the conference when she talked about the things that polyglots do differently. One thing was that they only learn one language at a time. Because if not, you don’t really learn either very well, and you speak one language, then you speak the other… And it’s just pretty hard to learn two languages at once. I would just do one language all the time, that’s better in my opinion.

Gabriel: Yes, and not, Italian, for example.

Luca: Yes, exactly. Okay, very well. There you have it. It’s interesting to get his point of view because lots of people ask us about this. So here’s what we’re going to do:  Gabriel has a blog in German called “sprachheld.” And he also has a YouTube channel. So we’re going to continue our discussion about language learning, and more specifically about this same topic of learning two similar languages. We’ll do it in English and you’ll find the link to that in the description below and on our blog. But for now: thank you so much, and we’ll see you soon from Gabriel’s channel!