Speaking any language fluidly requires that you know how to use a lot of filler words. In Spanish, these filler words are called muletillas. Those that speak Spanish as a second language or are in the process of learning Spanish, should know how to use a lot of muletillas, as they spend more time thinking about what they’re going to say compared to those whom Spanish is their native tongue. In many cases, you may end up beginning a sentence only to get stuck half way through and need a second or two to piece together the rest. To enhance the smoothness of your dialogue, knowing some Spanish filler words will allow you to avoid interrupting your sentences. However, those learning Spanish tend not to just get stuck in the middle of their sentences, but in the beginning as well when they don’t exactly know how to begin a statement. Let’s take a look at some important Spanish sentence starters and filler words so that you can speak more fluidly. 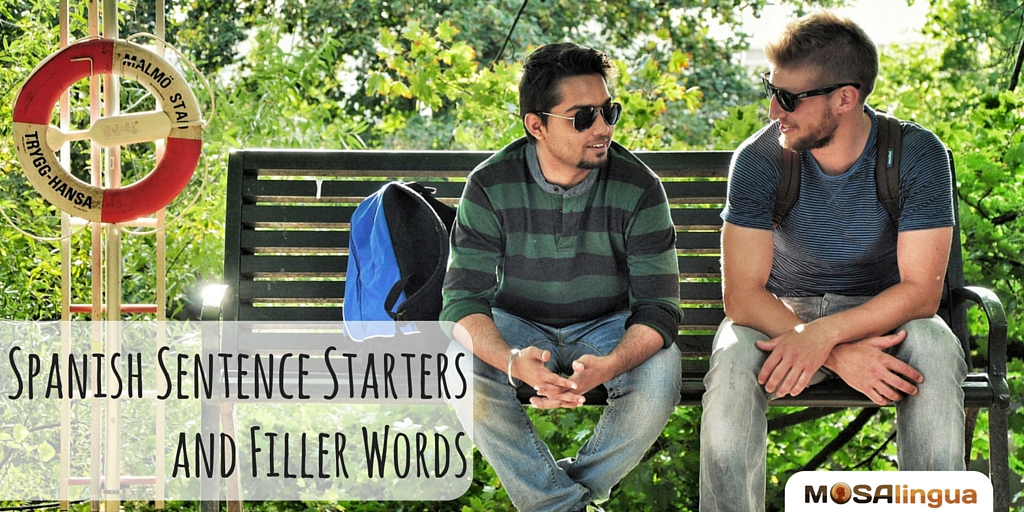 Ten of the Most Important Spanish Sentence Starters and Filler Words

The word, “Mira” is typically used to set the person you are talking to straight. It is often used during a confrontation or argument.

2. Este (only in Latin America)

“Este” doesn’t have a direct translation, but you can use it whenever you get stuck on a sentence.

“Bueno” is probably the most common of Spanish sentence starters and so you’ll often hear a sentence begin with “Bueno…”. It is often used to also transition a conversation from one subject to another. For example, saying that you’ll be on your way.

“Pues” is similar to “bueno”, but more informal. It often is used in the places where an English speaker would say “err..”, “umm”, or “let’s see.” Be aware, that in some Spanish speaking areas, such as Mexico, “pues” will be condensed to “pos”. On the other hand, in Spain it is “pue”.

“I’m very sick, I mean, I’m not even going to work tomorrow.”

6. Viste (only in Argentinean Spanish)

“It was a bit rainy today wasn’t it?”

Definition: The truth is that…, actually

“Let’s see, I’ll check if we have any pasta before getting some at the supermarket.”

Definition: by the way

“By the way, did you ever take out the trash?”

Both these words are similar to “by the way.” Typically, they indicate a transition into a new subject.

There you have it for a quick list of Spanish sentence starters and filler words to help you smoothly converse in Spanish. Although this list is not exhaustive, getting to know these ten phrases will go miles in allowing to easily transition your sentences and avoid stumbling over your words. Don’t forget to study up on your Mosalingua Spanish app, and use a Spanish Dic to ensure that your learning process in well-rounded. If you found this article helpful, then sign up for our newsletter to stay updated on useful information and language learning techniques!