Some beautiful combinations are born when Hispanic and Anglo cultures meet. Tex Mex (tacos and burritos that aren’t quite Mexican, not quite Texan, but very delicious) Cinco de Mayo parties with colorful piñatas and refreshing margaritas, and Junot Diaz’s novels, to name a few. Many artists fuse English and Spanish language and beats in their music, too – and we love “shaking our bon bons” to the results! Here are a few of the top (or, el mejores) Spanglish songs of all time.

This one barely qualifies as Spanglish (the only English portion of the lyrics is “Hey, Macarena”), but since I haven’t been to a single wedding where this classic hasn’t been played, I had to include it. This 1993 song is about a woman named Macarena, and even the least coordinated dancers can get on board with the simple but catchy choreography. If you’re not familiar with it (if you’ve been living under a rock, for example) or need to brush up, check out the video tutorial above.

Madonna has written and sung several Spanglish songs, but this one was her first, and my favorite. It’s an ode to the fictional “beautiful island” of San Pedro (which might be based on the city of the same name in Belize). Madonna plays opposing characters, a young Catholic woman and a spicy Latina in a red Flamenco dress, in the music video. You’ll want to book a trip and fall in love with a tropical island after listening to this tune!

Los Lonely Boys are three Texan brothers – Henry, Jojo, and Ringo Garza – who play a mix of rock, Tejano, blues, and soul music and often include Spanish lyrics in their songs. Henry wrote their debut single “Heaven” when “living in Nashville, crammed with their families into a tiny house, not making enough money to get by, feeling like the whole world was crashing down on them,” according to a Rolling Stone interview. Their situation must be quite a bit better now, seeing as the song won a Grammy Award in 2005!

Shakira is the queen of Spanglish songs, so this is just one of many that could have easily made this list. The salsa mix, featuring rapper Wyclef Jean, was reportedly played a whopping 9,637 times in one week on American radio. The beautiful and talented Columbian artist sings about how a woman’s dancing can literally “make a man wanna speak Spanish.” It definitely makes me want to learn!

Unabashed Ricky Martin fangirl, here (if you didn’t catch my reference in the intro paragraph, that’s him too). The Puerto Rican pop star is said to have inspired the “Latin pop explosion” of the 1990s with this “crazy” song. It spent five weeks in the number one spot on the American Billboard Hot 100 list. And VH1 named it the 28th best song of the 90s. The movie Shrek 2 even featured this tune as an Eddie Murphy/Antonio Banderas duet.

Next up, Enrique loves to sing about dancing, and we love to dance to his singing! I couldn’t pick just one of these songs about grooving to include in the list. Both Spanglish tunes (1999 and 2014, respectively) are muy caliente, and worldwide hits. The Spanish artist has released ten studio albums, and has even forayed into television and film acting. At just 41 years old, I think it’s safe to say we’ll be seeing him dance for years to come!

Originally written by Carole King and performed by The Shirelles, this song has been covered by numerous artists including Amy Winehouse and the Bee Gees. But my absolute favorite version is 22-year-old Leslie Grace’s bachata Spanglish rendition, whose cover came out in 2012. Who knows if Leslie’s lover will still be crazy about her in the morning, but I’ll love this song forever!

This is a true Spanglish song, switching back and forth between languages in the middle of lines. The Cuban-American rapper is known for his bilingual lyrics. The 1989 song calls out a “mentirosa,” or “lying woman.” My favorite line from the song is definitely this smooth rhyme: “Come and enjoy what a woman gives an hombre; but first of all, see, I have to know your nombre.”

This one isn’t Spanglish, but rather Franglish. The chorus asks questions in Spanish (“que voy a hacer?”) and answers in French (“je ne sais pas,” “je ne sais plus,” “je suis perdu”). It’s great for learning Spanish vocabulary, and super catchy. Plus, it’s on President Obama’s summer playlist (which also includes the Mexican song “Bucurrucucú ​Paloma”), so you know it has to be good!

As you add these Spanglish songs to your playlist, did you know that music can also be great tool for language learning? You can adapt exercises to your personal music genre or artist preferences, making you more likely to benefit. Plus, listening to music is an enjoyable activity, so you’ll associate positive feelings with language learning. Check out our 5-step process for using songs like these to optimize learning, and turn it up!

And if you’re more into TV and movies, we developed our very own gripping series, and it’s completely in Spanish. It’s addictive (thanks to powerful cliffhangers) and best of all, it will help you improve your Spanish listening comprehension. Throughout the series’ 27 episodes, you’ll work on your Spanish listening skills. You’ll also broaden your vocabulary and learn some essential grammar and conjugations. 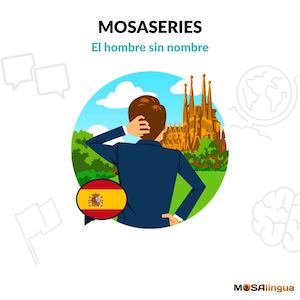