This is a very specific video, but that doesn’t mean it’s not extremely helpful for learning English pronunciation! The word “the” is one of the most commonly used words in the English language and so knowing how to pronounce “th” sounds in English properly will go a long way toward becoming fluent! 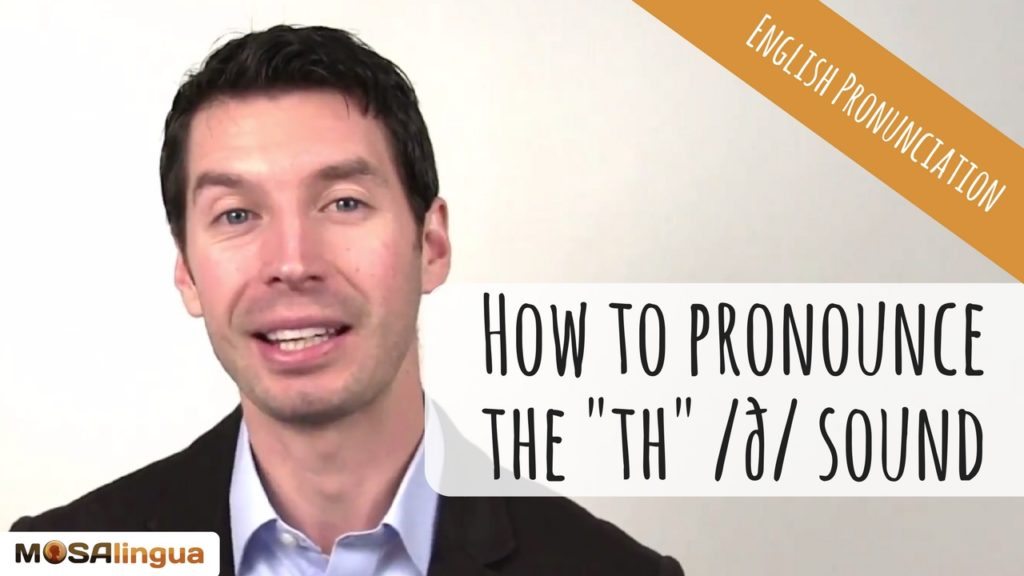 MosaLingua pronunciation expert Sean walks you through this tricky English sound in a short, convenient video. Watch it right here or on our channel. If you need subtitles in Spanish, French, German, Italian, or Portuguese, click the gear in the bottom right corner of the player to turn them on. You can also slow down the video speed.

Learn to Pronounce the th /ð/ Sound, Step by Step

We already learned that sound, the same sound that’s in the word “them” and “they” but now we’re going to learn to not use our voice. If you feel your throat this time, there should be no vibration. This sound is used in words such as “thanks” and “thought.” Give it a try; put your hand on your throat and feel if there is a vibration. Make sure you do not use your voice.

Let’s compare two words. One of them has the unvoiced “th” and the other has a different sound, a common mistake English learners make. One error is that people will make an S sound. Instead of saying “think” they might say “sink.”

Another mistake is to create a T sound which also involves the tongue inside the mouth. So instead of saying “thin” someone might say “tin,” which involves a quick burst of air and a release of the air. The difference is that in the “th” sound there is a steady flow of air creating friction through the teeth as it’s resting on the tongue.

Once again we practiced the words: “thought” and “thanks” and we also compared “think” and “sink” and “thin” and “tin.” Those are really good minimal pairs to practice with. If you have a common mistake, it’s good to compare those two sounds.

It was great practicing with you! Now it’s time for you to practice on your own. Thank you for watching!