Do you think the words “language” and “psychology” are unrelated? If so, you’re in for a surprise. There are some wonderful books on language learning that give helpful information about the relationship between psychology and language. Here are a couple of psychological principles that will help you learn your target language. Knowing how psychology factors into language learning will make you a more confident, fearless, and successful learner! 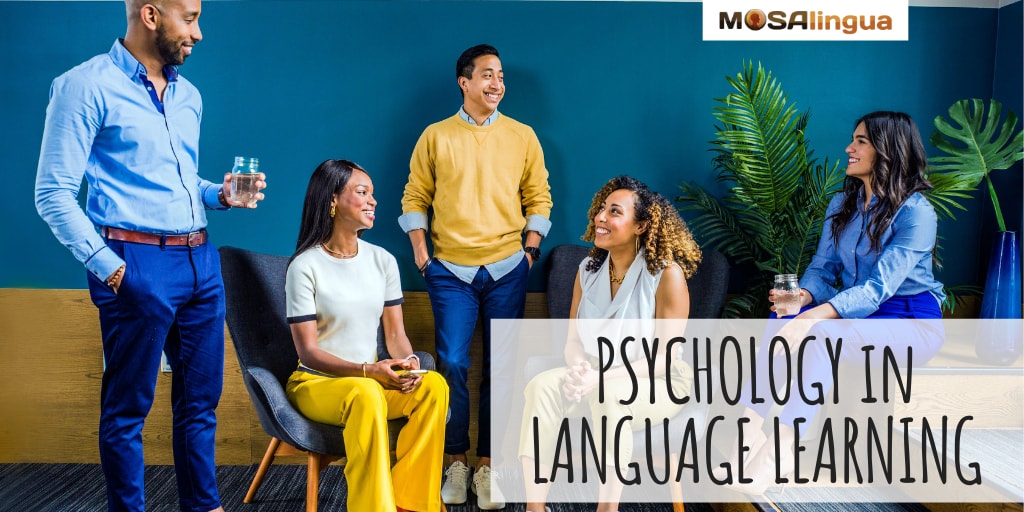 I’m sure you agree with me… it’s never a good feeling to be embarrassed. Especially when you’re learning a language and haven’t yet reached the level you want. So, how can you get over the fear you might have of losing face? There are two common ideas in both psychology and language that will help you acquire your new language.

I’ll introduce each principle with an example. Three friends all want to learn a new language, let’s say Spanish. Jack, Rebecca, and Kevin are all motivated. From the beginning, they each take a different approach.

Four weeks after beginning, Kevin has stopped. Despite his motivation at the beginning, life has gotten in the way. As for Rebecca and Jack, they’re still on course. They both study every day, even though their motivation wanes sometimes. In fact, they’ve each thought about stopping, but ultimately decided to stay focused on their goal.

Principle #1: The power of public engagement

By writing her goals down, Rebecca made a pact with herself, so quitting would be like giving up on herself. This is what Robert Cialdini calls the “principle of consistency”: people like their actions to be consistent with what they’ve previously said or done. Giving up on a goal after you’ve announced it to others feels a lot worse than when you’ve kept it private.

This idea gains even more weight when we feel the need to prove our commitment to others. This was Jack’s approach. He didn’t only set the goal for himself, he shared it with a group of friends, family, and coworkers. In short, he can’t give up on his objective because of the fact that he shared it widely on social media. In other words, Jack doesn’t want to go back on his word, and feels a certain obligation to continue. And in the end, this additional motivation will help him pull through and keep his engagement longer than Rebecca. She decides to stop after about three months.

Jack doesn’t want to lie when his friends or colleagues ask him how his Spanish studies are coming along. He wants to be able to tell them confidently that he’s made progress.

This scenario shows the importance of public engagement.

This idea has been proven by several studies. For example, this one published in 2013 compares the weight loss results of those who shared their goals and progress publicly with those who did not. The verdict? Those who tweeted lost more weight.

I know some studies say the opposite, recommending that you shouldn’t share your goals. They argue that the social gratification you get from sharing an objective can give the false sense of having accomplished something before even starting. But honestly, I’m convinced that the principles at play when you share your commitments are more powerful and work for the majority of people.

To give you another example, let’s look at what our English teacher Abbe did a few weeks ago. She published a video on our YouTube channel to announce she was starting a 30-day challenge to have a basic conversation in Spanish. Thousands of people watched her video, so Abbe could never have quit, and this public engagement helped her achieve her goal. To see how she did, go ahead and watch her conversation with our Spanish teacher Mirari on our channel.

Here are a few tips if you’d like to try the same thing:

As Kelly McGonigal says in “The Willpower Instinct,” willpower is contagious. Having a study partner can really help.

In addition to making your commitment public, you can employ another principle called “loss aversion.” The website StickK can help you turn this fear of losing something you value into a motivating factor.

Go to their website, add your challenge, and commit to paying a kind of fine every day you don’t meet your goal. This way you’ll have another powerful motivation to keep your word. And if you don’t stick with it, the money you pay goes to charity. So you’ll do something good either way!

Another way to carry out loss aversion is to pay for a language tutor. If you pay ahead for conversation lessons, you’ll be more likely to stick with it. You won’t want to waste your tutor’s time or your own money. italki is a website and app where you can find affordable language teachers for virtual lessons. If you’re serious about learning languages, or if you’ve quit before, do yourself a favor and try these techniques out. You’ll see they work really well!

Watch Luca’s Video for Tips on Psychology in Language

You can hear Luca tell you more about each of these tricks in our video on YouTube or below. The video is in English, but you can turn on subtitles in six languages. Just click the Settings gear at the bottom right. You can also slow down the playback speed (again, click the gear).

If you’re interested in learning more about the psychological aspect of language, we also recommend: