As I mentioned in the Q & A about the best way to learn a language, I don’t believe you need to live in another country to achieve that goal.
With the hindsight of having learnt Spanish in Colombia, I have no doubt I could learn another language, sat on my computer at a desk in England.
However, that’s not to say I see no value in living in another country, because I absolutely do. It’s not critical to learning the language in itself, but it provides you with the opportunity to have an experience you’ll never forget. 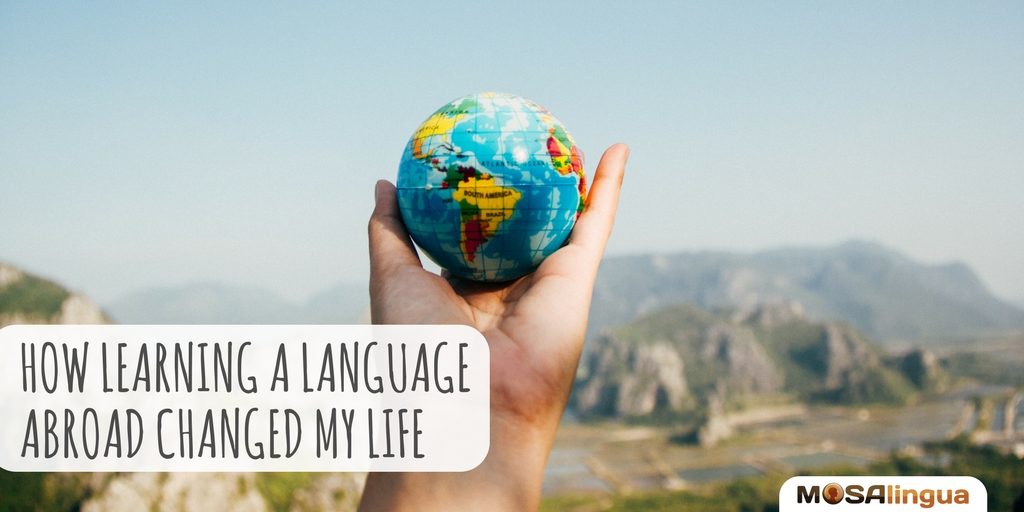 I came to Colombia with the sole purpose of learning Spanish, nothing else mattered. I’ve been fortunate to have travelled a fair bit over the years and I honestly hadn’t set out to do more of it, it just wasn’t a priority. The dream was simply to learn another language.
Since spending more than 9 months in Colombia however, my outlook on this has changed a great deal.
When I arrived in the capital city of Bogotá, I was adamant that I’d try to avoid English speakers and get myself surrounded by Colombians. I hardly ever hear other people speak English and that’s exactly how I wanted it. I came here to learn Spanish.
As a result of that decision, I look back on the last 9 months, with a smile of disbelief at everything I’ve experienced. Getting involved with Colombians has given me memories I’d never have had if I’d hung out with ex-pats in general. 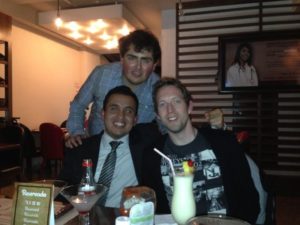 From the start, I decided to live with two Colombian brothers in a flat in Bogotá and I’ve never looked back. The above photo  was taken on my 30th birthday, hours after recording my ‘Did I do it? Fluent before 30 blog video.
I’ve joined the brothers on their visits to the family home on many occasions, where I’m always made to feel like another son. Their home town is a few hours north from Bogotá, in a place called Tunja and I’ve not seen a single tourist when I’ve been there.
I’ve been to the 60th birthday party of their dad, which had some fantastic traditional live music and a LOT of food. I received a great deal of attention from some of the old ladies, who’d never seen blue eyes in real life before! I was with the family again for Christmas soon after, which was great thing to have been involved in.
The same Colombian brothers introduced me to my now Colombian girlfriend, which is not something I planned to happen before I came out here! Always when you least expect it eh?
I was a +1 to her cousin’s wedding, which in Colombia includes ‘Hora loca’ (crazy hour). The photo below describes what that’s like better than I ever could, but it’s fair to say Colombians know how to party…… 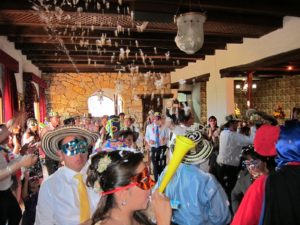 I was with the lovely lady and her huge family for New Year’s eve, with the traditional 12 grapes at midnight and people walking around the block with a suitcase for good luck. In yellow underwear.
I also ended up with champagne sprayed in my eyes. Formula 1 drivers do a damn good job of hiding how much that stings!
A particularly rewarding experience has been helping out as a volunteer on the outskirts of Bogotá, up in the mountains. It’s something that highlights the gap between the rich and poor here in Colombia, like nothing else. This is a photo of us teaching some of the children basic English through drawings: 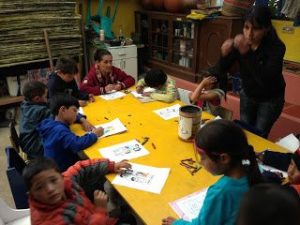 In the UK, baby showers tend to be for the ladies and not usually something that involves the men. I’m not sure of the usual protocol here in Colombia, but men were invited to the one I attended the other weekend. They ended up on the laps of their girlfriends, drinking whisky/beer from a baby bottle, as part of a bizarre game that I still don’t quite understand. Luckily the girlfriend and myself were on Colombian time, so we arrived after the game had started – relief!
All these events and occasions had one thing in common. I was the only non Colombian there. It really will be strange to be back in the UK, where you’re surrounded by English being spoken. I can barely remember what that feels like. 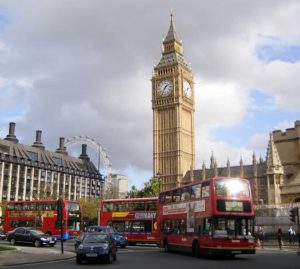 18 months ago I was living a life that couldn’t have been any less exciting and any more similar to all the previous months and years before. Sat here writing this, it’s still hard to register that I quit my job, sold my car and left all my friends and family – all to head off to Colombia.
It reminds me of something a friend told me, regarding my decision to make such a drastic change:
‘The biggest risks have the biggest rewards’.
They’re not wrong.

James is a language learner from the UK, who left his job, car and house to realise a dream: to become a Spanish speaker. He moved to Colombia for a change of scene and has since caught the language learning bug. James has recently started learning Italian and intends to then move on to German. They are both countries in which he holds a great interest, something he feels is a key to achieve his goals.