There are more than 7,100 languages registered around the world. 7,100! Can you even wrap your mind around that? In Papua New Guinea alone, the country with the most languages, there are over 800! The data isn’t good enough (and probably never will be) to list all of them, let alone put them in order according to number of speakers. But today we’re revealing the top 10 most spoken languages—some of which are among the most useful languages to learn. That’s a pretty good start, if you ask us! 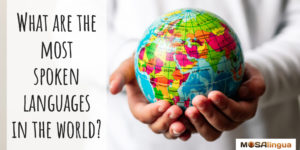 What Is the Most Spoken Language in the World?

Creating this list wasn’t simple. Among all the data scientists who have tried taking on this task, few agree on the 5th- and 8th-place languages… Also, since this classification is based on number of speakers, the data varies quite regularly. People are born and pass away constantly, and not all countries and languages grow at the same rate.

Top 10 Most Spoken Languages Worldwide in 2022

To make things a little easier, we’ve chosen to rank languages according to total number of speakers. This includes native speakers as well as people who have picked up the language as a foreign language. 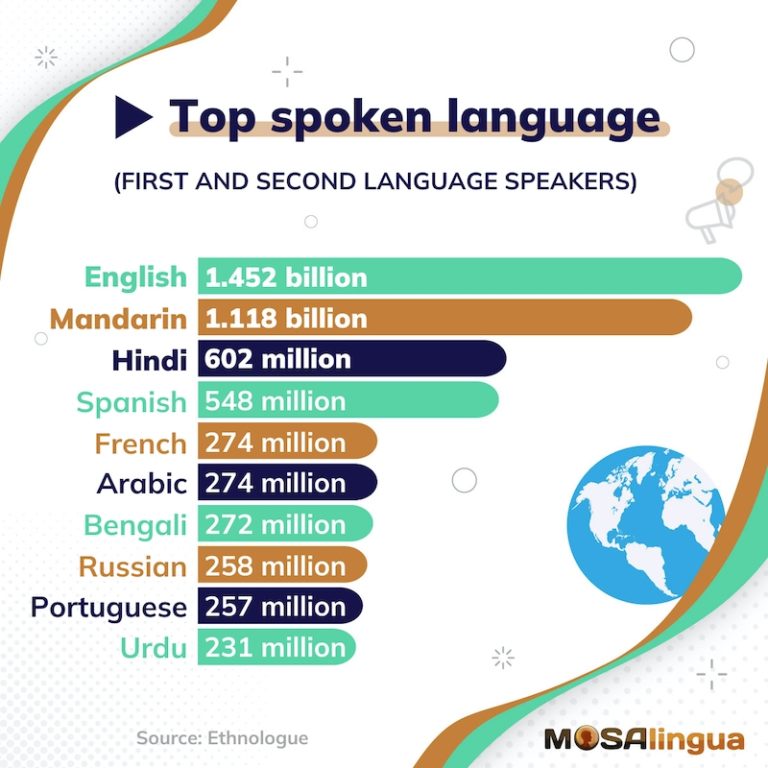 The Most Spoken Language in The World is English

As much as we would have liked to create a bit of suspense, the result is no surprise.

Where is English spoken?

There are 1.452 billion English speakers spread out across the continents, and counting! Which is a small advantage to those that want to learn it. Whether you’re in Africa, Asia, Oceania, or Europe, you’ll always come across at least one country that has English as one of its official languages. Get ready for some fun facts…

Top 10 Most Widely Spoken Languages in the World, by Total Number of Speakers

One of the many Chinese languages was bound to be in first place since China has more than one billion inhabitants—although not all speak the same dialect.

Where is Mandarin spoken?

Unlike English, most people who speak Mandarin do so as a native language. Close to 930 million people in roughly 33 countries around the world, mostly in Asia, speak Mandarin as a first language.

That’s probably because, although it is one of the most popular languages, Mandarin Chinese can be rather challenging to learn. But nothing’s stopping you from taking on the challenge! You’ll just have to have quite strong motivation and a lot of patience to master it.

Where is Hindi spoken?

Again, unlike English, people only speak Hindi as a first language in about seven countries, and mostly in India and Nepal. Its success is due to the sheer number of people living in these countries. 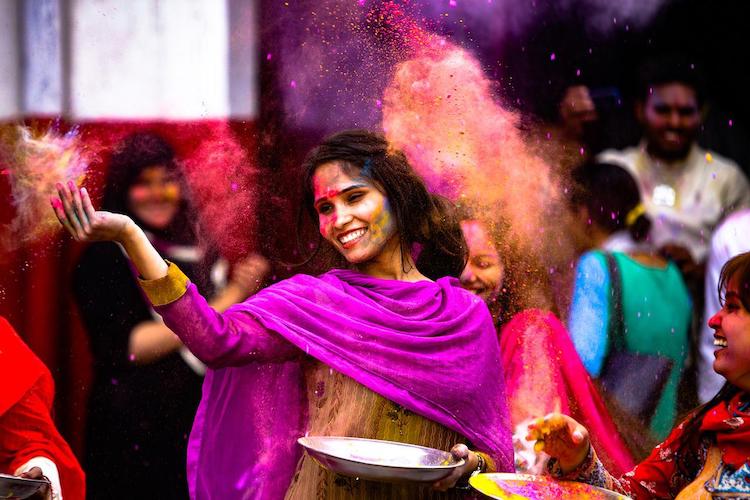 Where do people speak Spanish?

People speak Spanish in 31 countries, mostly around Latin America (and Spain, of course!). It boasts around 475 million native speakers. Here are a few interesting facts about Spanish.

➡️ Check out our Spanish pronunciation guide to learn more!

French is used by about 235 million people every day and is considered a world language, as it is spoken by about 274 million speakers in over 50 countries and is often learned as a foreign language worldwide.

Where do people speak French?

French is an official language in: France and its overseas territories, Canada, Belgium, Switzerland, Luxembourg, Valle d’Aosta, Monaco, numerous countries in West and Central Africa, and Haiti. People in Arabic-speaking North Africa and Southeast Asia also widely use it as a secondary language.

Where is Arabic spoken?

Around 274 million people in close to 60 countries speak Arabic. Learn more about Arabic:

Where is Bengali spoken?

People only speak Bengali as a native language in a handful of countries, mainly in India and Bangladesh. Despite this, 265 million people speak it, making it one of the 10 most spoken languages in the world. Here’s an interesting fact about Bengali:

Where is Russian spoken?

People in 19 countries (at least 150 to 160 million) claim Russian as their native language. Most of these countries, such as Belarus, Ukraine, Moldova, and Turkmenistan, formerly belonged to the Soviet Union. However, it is now only the official language in 4 countries. 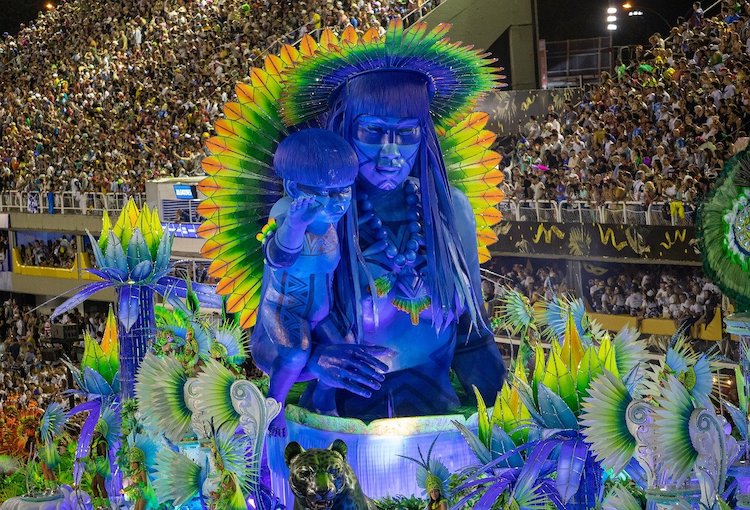 Portuguese made this list mostly thanks to the immensity of Brazil! In fact, 4 out of every 5 Portuguese speakers in the world today are Brazilian. But close to 257 million people in 10 Lusophone countries, 5 of which are located in Africa, speak Portuguese. Learn a few facts about Portuguese.

Urdu belongs to the Indo-Iranian branch of the Indo-European language family.

Where do they speak Urdu?

Urdu is the national language as well as the official language in Pakistan and some Indian states with a large Muslim population. In Pakistan, only about 7% of people speak it as their mother tongue, but that’s about 14 million inhabitants.

10 Most Spoken Languages, by Number of Native Speakers

It’s also fascinating to organize this list by the number of people who speak a language as their first language, also called their mother tongue or native language. In other words, the language they heard from birth and learned before any other language. The list looks a little different:

What is the 10th most spoken language by native speakers? Vietnamese? French? Malay, Indonesian, Javanese, Punjabi…?

Unfortunately, we don’t really know because many languages are fighting to be the 10th most spoken language in the world. This position, just like the previous ones, often varies according to different factors. These factors themselves can also vary, such as the number of a country’s inhabitants.

But Punjabi could be a safe choice because two sources we consulted agree on putting this language (mainly spoken in Pakistan) as the 10th most spoken language in the world.

In any case, whether you choose one of the most spoken languages or not, bear in mind that it’s important to learn a language that will be useful for whatever your personal goals are. Maybe you want to learn a language for professional development, or maybe for leisure and travel. However, nothing’s stopping you from learning one or more of these languages (or others) just out of curiosity and for fun!

Some Languages Aren’t So Lucky… What Are the Least Spoken Languages?

Like I said before, people around the world speak over 7,000 languages. Some, like the ones you read about in the list above, are very widespread languages, counting millions (if not billions) of speakers.

Other languages are spoken by only a few people, and are at “severe risk of extinction.” Take Ayapaneco, for instance. This language, born in present-day Mexico, supposedly had just two fluent speakers left in 2011. And according to a Guardian article, they aren’t on speaking terms right now! The article tells the sad story of how this language became so critically endangered, and the measures people are taking to save it. (Disclaimer: since the article was published, other sources have criticized the news outlet for spreading false information.)

Can a language go extinct?

Controversy aside, there’s no denying that languages, like the people who speak them, are constantly changing and evolving. It’s sad, but, like animals, languages can go extinct.

Wondering what you can do to help? Well, learn them! Here’s a list of obscure languages, plus some resources to get you started if you decide to learn one of them.

The Endangered Language Project also has helpful information and many resources if you’re interested in learning more about these rare languages.

UNESCO has a way of classifying endangered languages with few speakers left. They categorize languages by status:

There are also “safe” languages – like the languages with the most speakers in the world in the list above! The organization counts over 200 extinct languages, but there are likely more that we don’t even know about. About 1/3 of all languages fall under the endangered listing. On the flip side, 50% of the world’s population speaks just 23 languages!

Bonus Video: Top 10 Most Spoken Languages in the World

Most spoken languages in the U.S.

People often refer to the United States as a melting pot. People have come to begin a new life in the U.S. from all over the world and for a wide variety of reasons. The fact that there are hundreds of different cultures mixing and interacting is part of what makes American culture so great, and so purely American! The top 10 languages spoken at home in the United States, according to U.S. Census data:

Most written languages in the world

We’ve talked extensively about spoken languages, but the internet is so important these days that this article wouldn’t be complete without mentioning the languages people use to communicate on the web. Check out this estimate of the top 10 languages used online (as of March 2021) by Visual Capitalist:

We’ve also written about the most useful languages, especially in the business world. We came up with that list by studying the diffusion of languages around the world, their economic and political advantages, as well as geographical proximity to your country of origin.

We took it upon ourselves to find out the most studied languages in the world, too. If you’ve already read that article (and if you haven’t, bookmark it to read after this one!) you’ll know that the most studied and most spoken languages are not necessarily the same. We found good data about public language education, but unfortunately, the numbers don’t take independent learners (MosaLingua users like you!) into account.